You Look at Me, I Fall In Love: A Few Reasons Zamora is Going to Be Awesome

As you know, I'm going to be teaching English in Zamora, Spain, come September. It's a dream come true not only because I've always wanted to live in Spain, but also because Zamora has a lot going for it (in my humble opinion).

You probably haven't heard of Zamora before. If you look it up online, you'll find phrases like "overlooked" and "the quiet interior of Spain." That suits me fine. My dear Stanley taught me that many of the finest things in life are quiet and hardly anyone knows about them. 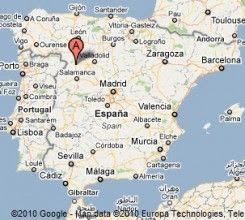 This anonymity is recent. From the time of its founding at the beginning of Roman power in Iberia, Zamora played an important role in commerce and military strategy. Its history is full of explosive characters, a goldmine for historical novelists—and I'm planning to do a lot of mining!

A most notable character is Urraca de Zamora. Her father, King Fernando I, decided to divide up his vast kingdom among his children. (This might seem like a good idea, but it has never played out well in history or fiction.) Urraca's three brothers fought it out until Sancho II had become King of Castilla, León, and Galicia. However, Urraca's father had granted her sovereignty over the walled city of Zamora, and she wasn't giving it up easily. Sancho besieged the city and then sent El Cid himself to ask Urraca to hand over Zamora in exchange for many different prosperous villages with their noble vassals. She refused with the vehemence required and with the support of the loyal Zamorans. In the end, she had to call in her other brother, Alfonso, to help, and once the siege of Zamora was over, Alfonso had become Alfonso VI of all the kingdoms of his father.

That's only one example of how desired Zamora has been by important players. The Spanish saying "Zamora no se ganó en una hora" refers to the many long sieges it suffered as leaders through history took great pains to win it or recover it.

Zamora has crossed my path before, kind of a teaser trailer for this new life plan. My proudest accomplishment, Seven Noble Knights, begins with a siege of Zamora (read it here when you scroll down)!

I also visited for one day before I started my doctoral dissertation research in Salamanca. It was not enough time to even begin to delve into the amazing architecture all that history has left behind. Zamora is a major center of Romanesque architecture, and I adore that style. I will adore imagining historical and fictional characters interacting, feeling their emotions, and living their everyday lives in and among this architecture. Much more about that later.

Finally, I had a feeling all along that it would be Zamora. The program I'm teaching with only allows you to choose the top three regions you'd like to be placed in, what type of school, and what size of city. None of the preferences are guaranteed as they place hundreds of teachers all over the country. I had indicated Castilla y León as my first choice because Stanley had said his favorite city was Burgos (the site of many scenes in Seven Noble Knights). I was thrilled when I received my first regional choice, but intuited that it wasn't going to be Burgos.

There were two Spanish pop songs in the 1980s that had provincial capitals of Castilla y León in their titles, and I strongly felt that it was going to be one of them. In my darker moments, I knew Soria was the place for me. I'm sure it's wonderful, but it's the only capital of Castilla y León that I haven't visited at all. Its '80s song is a six-minute epic of mystical angst and disappointment in love, complete with an organ that evokes church or the phantom of the opera.

These are the lyrics of "Camino Soria" (my translation):

Everyone knows it’s hard to find a place in life where time passes rhythmically without thinking, and pain doesn’t stay long. On the banks of the Duero there’s a city. If you don’t know the way, listen to this: The dead leaves fall slowly as you walk by and the deer begins to speak. On a cool morning the sun’s already out but can’t warm anything. When you can make out the mountain of the spirits, don’t look. Recover and keep walking. Bécquer was no idiot and Machado no lout, and from the two of them you find out that the cure for love is solitude. On the banks of the Duero, there’s a city. On the banks of the Duero, my love, I’m waiting for you. I’m headed to Soria, where are you going? There, I’m in my glory as never before. I’m headed to Soria. I want to rest. Erasing from my memory betrayals and the rest. Erasing from my memory, I’m headed to Soria.

After the year I've had, I don't need any more brooding. I've got that covered.

So I turned to the other song, "Zamora." The lead vocals are by none other than Manolo García, one of the loves of my life! Added to that, the lyrics and music are loud, fun, nonsensical, ROAD TRIP mayhem. (This is the 2015 version. The '80s version appears to use Zamora as an insane asylum. We'll leave that aside, too, thankyouverymuch.)

These are some of the lyrics (my translation):
There’s no rush to get there, everything’s yet to be discovered. If you want to come along, there’s room on board. I’m a gray Argonaut, but I have a plan: just friendship, that’s the deal. Chimeras, excitement, that’s what’s coming. Benzedrine-free shine, that’s the goal. A life of musicians who never want to stop, a life of acrobats and tricks. We’ll be freaks with excellent etiquette, guests no one is expecting. She looks at me, I fall in love with her, she takes me to Zamora. Our journey ends if I propose a wedding. And if you go off with someone else, I fall in love with your mother. You call me and say, “Calm down, don’t get worked up.”

In both cases, the cities were chosen because of the multiple rhymes that could be made with their names, but I listened to "Zamora" on repeat for several days while I awaited my school assignment. When the email came in, it was so very official, with a dateline and everything, in the administrative capital of Castilla y León, Valladolid. Valladolid is a large and amazing city, but I was disconcerted because I thought I'd been assigned to a school there. No, silly, keep scrolling! Ah, there's the school address: It's in Zamora! Yippee!

A fun song named after it, I started my first novel in it, Romanesque architecture, thrilling history, a good school, I should be able to walk just about everywhere, and it's close to Portugal. In ten trips I've taken to Spain, I've never set foot in Portugal. Time to dust off the bucket list.