In 2015, mere days before I got the long-awaited and welcome news that my epic novel Seven Noble Knights had been accepted for publication, I visited Salas de los Infantes for the first time. Salas is the home territory of the heroes of the saga, and I was thrilled to see their legend so alive in the world.

My husband and I explored the town and had a lovely meal, but the church where it was said the skulls of my heroes were laid to rest was shut tight. I was too shy to tell the lady in the town hall what I was really looking for in Salas.

Fast forward three eventful years. Seven Noble Knights had been published to critical acclaim, and I returned to my characters' home territory with that validation and a new sense that life is too short for shyness. I was resolved not to let something as stupid as not asking for what I wanted keep me from seeing the casket with my heroes' skulls and donating a copy of Seven Noble Knights to the city.

I led my mother to the town hall and found, I think, the same lady I had spoken with in 2015. My mother witnessed all of the following silently, and I wonder if her lack of Spanish made me seem like I knew what I was doing.

Even with a big American smile to hide my nerves, I still had to ease into what I perceived as the riskiest part. I asked about the church with the skulls, which is the main parish church in Salas and a reasonably popular tourist pilgrimage. The lady gave me a thorough run-down of what numbers to call and where to walk if I couldn't reach anyone on the phone. She thought her tourism work was done, but I took a dose of when-am-I-ever-coming-back-here with a dash of I'm-holding-this-book-and-what-will-I-do-with-it-if-I-don't-say-anything, and said, "I'm an author, and my novel about the legend of the seven noble knights has been published, and I'd like to donate this copy to the city."

The answer was surreal in its unexpectedness. "You have to go to the Dinosaur Museum and talk to the guys there. They'll flip out! Even though it's in English." (Dialogue approximate.)

After much more encouragement I hardly needed, my mother and I walked a few steps to the other corner of the Plaza Mayor to the so-called Dinosaur Museum. As we were to find out, this museum actually contains artifacts from all of Salas's history and prehistory, something for everyone. We entered to find two men at a chaotically creative reception desk. I screwed up my courage again, this time with a little more of a calling card.

"They tell me at the town hall that I should talk to you. My novel about the seven noble knights has been published, and I'd like to donate a copy to the city." I held the bright-red book out and hoped my face wasn't the same color.

Their reaction was an author's dream come true. You would've thought they'd just won the lottery. They took my darling Seven Noble Knights and leafed through it as if it were made of gold. "They really looked like they wished they could read English," my mother told me later.

"You've got to get in touch with a seven noble knights scholar," they said. "He's a teacher, like you, not in Salas, and he's written an extensive history of Salas and is cataloging all the artistic representations of the legend. Here's his email. While you're here, step into our Culture Palace. It's on the site of the seven noble knights' house and has a really cool stained glass window. And have you seen the ark with the heads in the Church of Saint Mary? You can't miss it."

"That's exactly what I was hoping to do next." 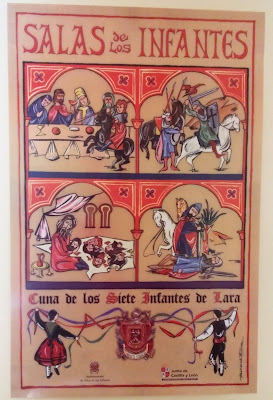 They let us see the museum for free and proceeded to make numerous phone calls to see if the priest was around, or a dean, or a sacristan, or anyone who could open up the church and tell us a little of the history. They gave me leaflets, brochures, and pamphlets about Salas, a program detailing a 2011 conference about the legend at which I recognized the names of many medieval Spanish literature scholars, and maybe half a million copies of the poster pictured. I'm meant to give copies to my friends, and I will find a few worthy recipients. I wish I had the resources to mail posters to fans of my book! I adore the poster because it's a graphic representation of some key moments in the saga. The fourth cartoon is so similar to the way I imagined the scene in Seven Noble Knights, it gives me chills.

They also told me that only a week from the date we were there, Salas was having its "legendary" seven noble knights festival. Events included children's activities, world cuisine, medieval dancing, jugglers and stilt-walkers, high tea, a craft fair, Bulgarian dancing, and the pièce de résistance, 7i, a rock opera based on everyone's favorite medieval legend.


It's hard to describe the beautiful feelings it gives a proud author to see other artistic representations of characters she adopted as her own. I never expected this phenomenon to be so agreeable. I almost wish all my books were based on beloved folklore.

Unfortunately, the festival was to take place during my mother's visit, and we already had hotel reservations and big plans for those dates. I hope they do it again next year, when I'll be ready.

Many minutes later, the wonderful cultural ambassadors at the Dinosaur Museum told us we should head to the church. They'd found a sacristan who knew a ton of history and was in town that day to show it to us. Before we left, they said Ridley Scott should pick up Seven Noble Knights and make an epic movie. Not the worst idea I've ever heard.

In 2015, I admit to being less than impressed with the outside of the church. Its tower, though imposing, doesn't look like it jealously guards the skulls of the seven noble knights.

Inside, however, it's balanced and harmonious, with elegant Gothic curves and ornate altarpieces of a unified aesthetic. The good-natured, studious, and ridiculously young sacristan, Isaac, turned on the lights and pointed out the historical interest in altarpieces and richly embroidered cassocks, appropriately building up to the show-stopper.

In 1579, it's said someone found a wooden box in the wall of the church with eight skulls inside and an inscription outside claiming they had belonged to the seven noble knights, Diego, Martín, Suero, Fernando, Rodrigo, Gustio, and Gonzalo, and their tutor Muño Salido. Paintings on that box served as inspiration for the modern town crest. 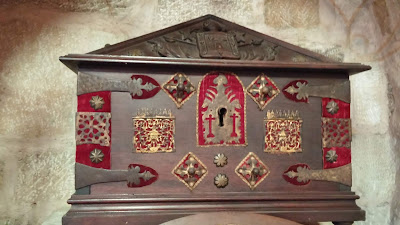 Isaac opened the grille so nothing would separate me from my beloved characters. It was so much more beautiful than I imagined, or had even seen in photos. Although small, the ark reassured me that the legendary history of this lovely town was being properly honored. 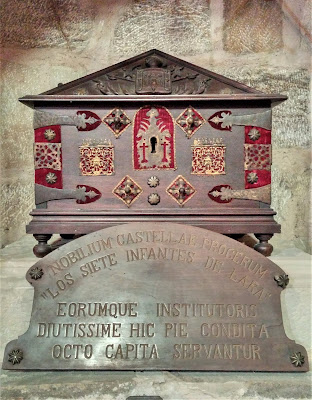 The current ark was made in 1924 with medievalist red velvet, golden metal flourishes, and a large keyhole. Isaac suggested something could be seen through the keyhole, and I put my eye right up to it, but of course it was too dark to make anything out.

I was able to tell Isaac something he didn't know: The ark was last opened in 1974 during Salas's one-thousandth anniversary celebration. 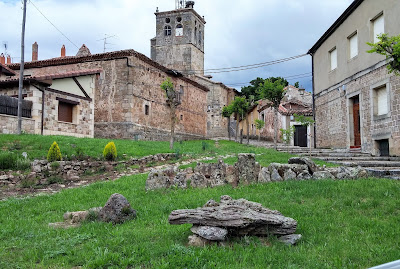 The Latin inscription on the plaque reads, "Here, piously maintained for a long time, eight heads of the noble lords of Castile 'the seven noble knights of Lara' and their tutor are treasured."

And I will treasure these moments in Salas in my memory. My heroes' home is my spiritual home.

Posted by Jessica Knauss at 12:01 AM No comments: