Thank You For a Life Making People Feel Happy

One of the biggest events of this past autumn for me and many other fans was the release of Manolo García's latest album, Todo es ahora ("Everything is Now"). The digital copies were never made available for download in the US, so I had to order the double CD from a French company doing business in Spain and charging enough money for shipping to mortgage a vacation home.

But I can't really complain. I received the disk the day after its European release with liner notes signed by Manolo García himself! How unexpected and wonderful. I can verify the signature because of a previous signed-item-by-mail-adventure.

I mention all this because the joy I and so many others have derived from the simple pleasure of Manolo's musical artistic expression is so great as to defy description. Which makes this song all the more surprising:

Last night I dreamed of David Bowie.
I ran into him on the street and said as we passed,
"I don't want to bother you, sir, but I must tell you
thank you, thank you so much."

He whispered something, then turned around,
drying a tear that welled up
from the center of the Earth.
From his mouth flew butterflies.

When I first heard this song, of course I thought, "No, Manolo, thank YOU." That one of the most beautifully creative people in the world has another artist to look up to gives hope to everyone who plies an artistic trade. And, as the final verses indicate, we all have something to share from our own well of creativity.

¡Gracias, Manolo! To all writers, singers, painters, actors, etc, famous and obscure: thank you! Art is what makes life more than survival. 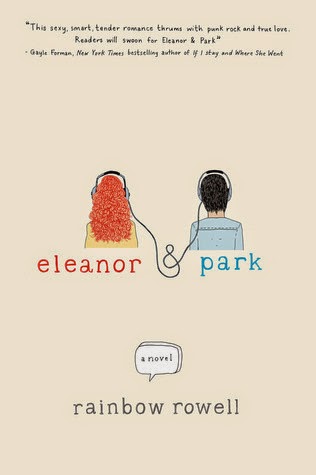 The author of this delightful book takes the opportunity of her characters sitting through a class on Romeo and Juliet to explain in the most convincing reasoning I've heard why adults want to read about teenagers: because people want to remember what it was like to be young.

Eleanor and Park are a few years older than I was in 1986, but their experiences of school and pop culture were still a blast from the past. The authentic details pull the reader in to intimate scenes where Eleanor and Park meet, on the bus, where clothing, hair, sounds, and fragrances make a difference in the lives of the characters. These small, believable, unbelievably tender moments build up to the sort of frenzied crescendo I can't get enough of. There are no death-defying moments in this book, but in the scale of the story, the climax fits perfectly. The reader feels exactly what each of the characters feels.

The idea to switch points of view was risky, but is helped by the consistency and the label at the top of each switch. I wasn't sure it would work in the long run, but getting both Eleanor's and Park's honest appraisal of their gentle yet star-crossed love ended up being hugely satisfying. I picked this book up  because the description mentioned that the lovers know they're doomed, but still try to keep their love alive against all odds, and a review said that it was great for YA readers who were tired of dystopia. While it could be argued that Eleanor's home life is plenty dystopian, this is indeed an optimistic novel that will please everyone's inner romantic.

Since I've read this novel, I've also learned that there's a movie planned. A huge opportunity for a non-skinny actress and an Asian actor!

Email ThisBlogThis!Share to TwitterShare to FacebookShare to Pinterest
Labels: novel, reading, review, YA

Out with the Old Word

Many cultures welcome the new year by throwing out what's old and useless. Some Latin American countries observe this idea symbolically by throwing water out the window or front door.

A step I recently had to take in the revisions of Awash in Talent reminds me of this process. There was a particular word I had delighted in using in a single instance, but every person who reads the novel stumbles on it or objects to it.

For your consideration, the context:

At eight years old, Beth began showing signs of severe allergies. My parents had always made me take her to play with my friends or to the mall on the bus, and you can imagine my annoyance, but those allergies made taking her anywhere completely intolerable. Every step had to be planned out beforehand, by my parents, because I just didn’t have the attention span for the long list of things to avoid doing, being around, or thinking about. I would look longingly at the kiosk for the DMV and Talent Registry, a fascinating study in chiaroscuro. Psychics, telekinetics, and pyrokinetics all had to register as the freaks they were, right alongside the happy fifteen-year-olds I longed to be one of, applying for driving permits.

The first objection came from my critique group in the Barnes and Noble café. What does "chiaroscuro" mean? Would an eighteen-year-old know that word?

My reaction was that I learned it in high school. Did I go to a great high school? No, I merely paid attention to all words that came my way, and come on, this is a great one. It's an art term, meaning the way the artist contrasts light and shadow. I learned it in drama class, perhaps during the stage makeup unit or when close-reading a play. My high school drama teacher had married an Italian and loved to teach about the Commedia dell'Arte, so that may have something to do with her passing on this word of Italian origin. Until I attempted to use the term, I had no idea that not everyone learned this word when they were fourteen.

As you may be able to tell from the excerpt, the narrator would be a hard person to like in real life. She wouldn't choose her words according to what her audience would understand. She would seek out words to confuse and dazzle her reader, and that's what "chiaroscuro" has done to every reader who's come across it since then. These readers include some of the best educated people I know, in places as diverse as Rhode Island and Ireland.

So I've finally recognized it as a "darling," in the sense that it must be killed. I must accept that Emily's antisocial writing has to be curbed if I'm expecting any readers to keep reading. Out with what's old and doesn't work, in with a great workaday word, "contrast."

Imagine the above paragraph, replacing the "chiaroscuro" phrase with "a fascinating study in contrast." Smoother? Easier? More encouraging? Let's hope 2015 is full of these moments of sanity on my part.

I've been working very hard on Awash in Talent, especially this first part, Hope & Benevolent. The idea fairy has planted the seeds of a sequel! Soon I hope to share some really great news with you about when Awash in Talent will meet readers! 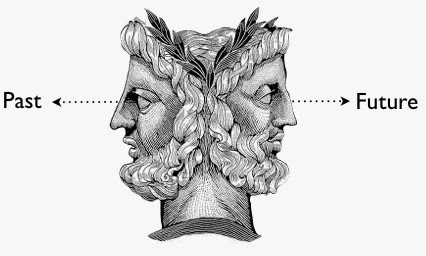 The Roman god Janus is literally two-faced, but not because he is a double-crosser. His biological peculiarity comes from his lordship over the month that bears his name: January. Living at this month when two years meet, he simultaneously looks back at the past year and ahead to the new one. He is both ending and beginning.

The tension of ending an old year while also starting a new one has inspired people through the ages to make a break with the past and promise to change their ways in the future—New Year's resolutions.

The Babylonians did it, the Romans did it, and medieval knights took the peacock vow. The nature of the promise of self improvement tells us a lot about what's valued in the culture. Have you ever resolved to give more to the poor? Or have your resolutions been more along the lines of losing weight or being more assertive?

My priority is writing. My goals for 2015 include completing revisions on my first two novels, publishing Awash in Talent (the second one), making as yet undefined progress on the third, and writing two short stories (one fantasy and one historical).

Blogging regularly is also on the horizon. Once a week, here we come! (I never thought it would come to this, back in my days of two, three, and four posts per week.)

I received a generous gift that will enable me to make another resolution of utmost importance to me: to read more (without editing). For 2015, I'm going to aim for ten books (mostly novels). Or maybe I should shoot for five and consider anything else a bonus?

I have some ideas already, but am open to suggestions. If my two goals in this are to enjoy the written word and to improve my writing by osmosis, what books would you recommend?
Posted by Jessica Knauss at 12:30 AM No comments: Links to this post