Oviedo was a hugely important urban center in the early Middle Ages, a focal point for the largely rural Kingdom of Asturias, which was the first area to be "reconquered" after Moorish domination began in 711. I was thrilled to visit it for the first time last November.

San Julián de los Prados is a pre-Romanesque gem of a church one kilometer from Oviedo's urban center. I trudged through the traffic and the rain in the cold of the early morning, suffering with my first cold of the season but determined to make my trip to Oviedo all about the early Middle Ages. 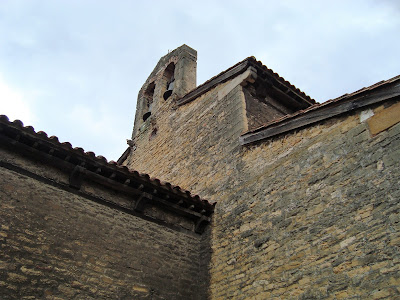 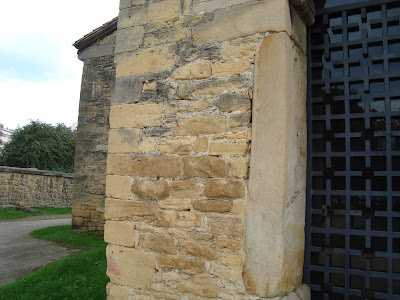 On the side of a highway, nothing much distinguishes San Julián from this side, but if you look closely, you can see the messy-looking but super skilled bricklaying technique and the archway characteristic of the first half of the ninth century, the reign of Alfonso II.

Alfonso II, known as the Chaste, also founded Oviedo Cathedral and was the first to make the pilgrimage to Santiago de Compostela from here. 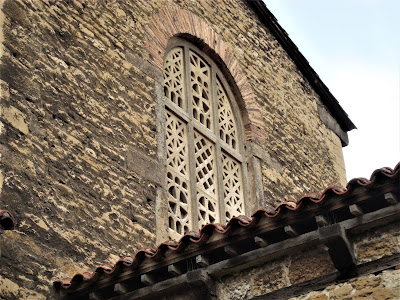 On the side closest to the highway, this gorgeous stone jalousie window let in latticed sunlight in a very particular spot we'll glimpse below. 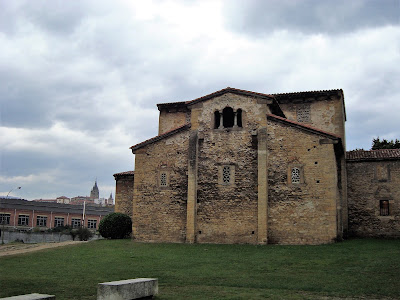 The back of San Julián, with its surprising view back to Oviedo's cathedral tower, is obviously pre-Romanesque, with its three-part window and the smaller, lovely jalousies. 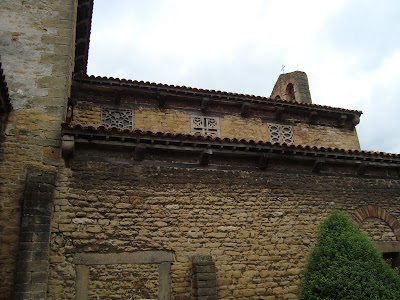 The architects and artists of the ninth century didn't value uniformity. If someone ordered three windows, the craftsmen made each one beautifully different.

They don't let you take pictures inside, but I risked who knows what kind of admonishment or banishment with my silent, flash-free camera because this interior must be seen. They said it had original painting in it, but I was not prepared for the floor-to-ceiling glory of what was inside. Geometric shapes and a celestial cityscape, complete with chambers and bed linens, and color, color, color! They found these paintings underneath layers of lime-and-chalk (later centuries' hygiene methods, they said). My photos aren't exactly professional, but when you're in San Julián, you only have to use a little imagination to place yourself back in the ninth century, in contrast to most other medieval sites, where you have to use all your imagination and still can't picture it. 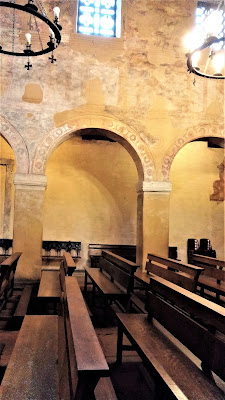 Here we see the side of the largest part of the church, where the less noble folk would've gathered to hear mass--basically the peanut gallery. It's not the most impressive spot, but it's still an eyeful. 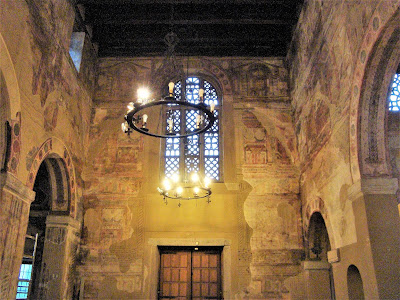 This is the other side of the large window we see from the outside above. It's to the right side of the main altar. I wish the pictures did it more justice. I stood there dumbfounded, looked and looked, and found myself incapable of taking it all in. Is that the same impression ninth-century worshippers would've had as they stood there smelling incense and listening to Latin speech and song? 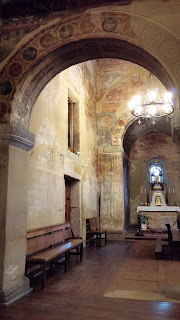 This gallery is to the left side of the main altar. The archway in front separates this area from the main congregation area, and nobles would've had spaces reserved for them here.

See the indentations in the wall above the bench and doorway? That's where the king's box would've been. It's across from the large jalousie window, which is placed exactly so that during mass, the sun shines through it with full brightness. (That's partially why there's less paint surviving on this wall.)

After all the people were settled and ready for mass, Alfonso II would appear on this balcony in his finest robes, embroidered with cloth of gold and decked out in all the jewels of the realm, surrounded by images of the celestial city, and the sun would create a spectacular scene of jaw-dropping splendor.

This was Alfonso II's public service announcement, a proclamation that he was indeed the chosen intermediary between God and the people. 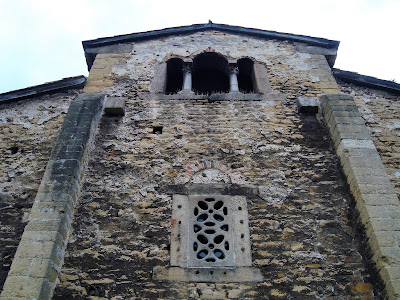 I staggered out of San Julián, overwhelmed with the aliveness of history. I later learned that the three-part window in back is the only hint of a secret chamber destined for who knows what purpose.

This was only the beginning of the mind-blowing experiences for a medievalist in Oviedo.

Spanish mornings are long. We got on the tour bus at 8 a.m., having swallowed some churros or other fast breakfast food, and we thoroughly experienced Santa María de la Riaza, which would've been enough medieval art for any other day or week, and then made it to Ayllón, but it was still nowhere near lunchtime.

Although Ayllón has works of art from most time periods, our tour focused on Romanesque standouts and the Gothic expressions inside them, and we still had our hands overfull. 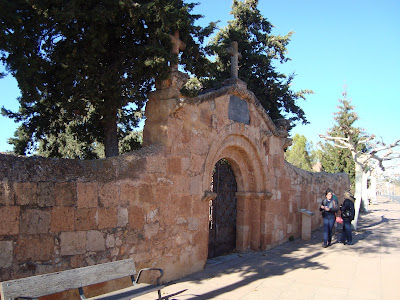 In fact, Romanesque churches were so abundant in the province of Segovia that—surprise, surprise—people in later time periods didn't value them, care for them, or even bother to keep them in one piece sometimes. The first monument we saw were the ruins of San Nicolás, which was converted into the gate of the municipal cemetery in the nineteenth century by demolishing everything but one doorway. 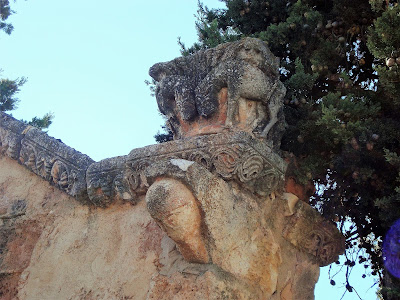 They scavenged a few column capitals and placed them according to their own tastes. We took the opportunity to study them at length, identifying heads, angels, and medieval handfighters. 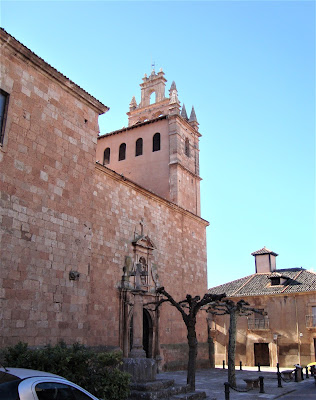 Another case of Romanesque reappropriation was Santa María la Mayor, a mostly Baroque edifice close to the Plaza Mayor with an impressive bell gable.


On the northern and eastern outer walls of Santa María, restorers placed Romanesque reliefs that probably originated in the church the Baroque builders replaced. The figures include lions pouncing on humans, an angel with a special monogram of Christ, and an instance of weighing souls in judgment. Why did they place those last two so high? 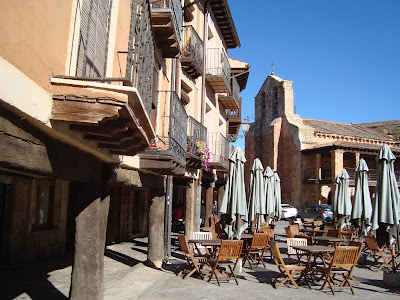 In the gorgeous porticoed Plaza Mayor, the main attraction was the church of San Miguel. It's now used as Ayllón's tourism office, and is a museum of marvels, inside and out. The apse is partially buried under street level, but that put the corbels that much closer to our avid eyes. 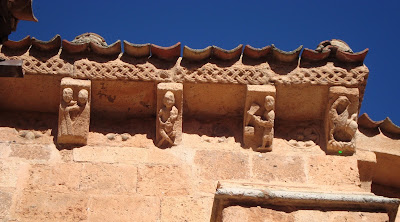 Here we see many corbels depicting people at various tasks, including a delightful one with a stoneworker doing some fine detail carving with one of his enormous medieval tools. Note the intricate crosshatching above and the quatrefoil flowers between the corbels. 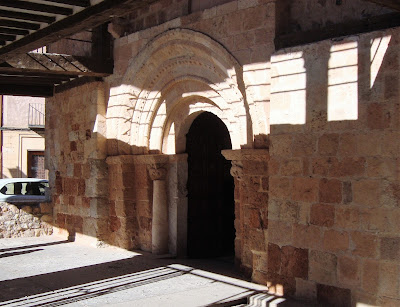 The southern entrance eroded quite a bit before they put a porch shelter over it. Its geometric decoration has heavy Sorian influence. 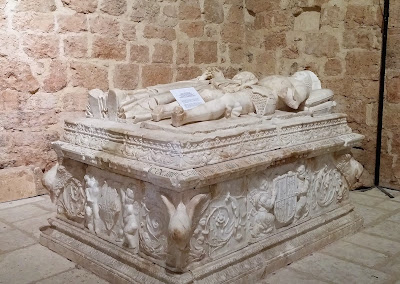 Inside, the nave is almost square and may have been built on a previous mosque. The different stones used in Muslim and Christian construction are clearly visible in the bare walls. Highlights include a balcony with mysterious Gothic painting, various Gothic burial niches, and the alabaster tomb of María Álvarez de Vallejo and her husband, Pedro Gutiérrez, secretary and treasurer of the Marquises of Villena, Diego López Pacheco and his second wife, Juana Enríquez. It may have been made by the same artists who completed the alabaster tomb of Fernando and Isabel in the Royal Chapel in Granada. Most of the damage was caused by Napoleonic troops as they came through! 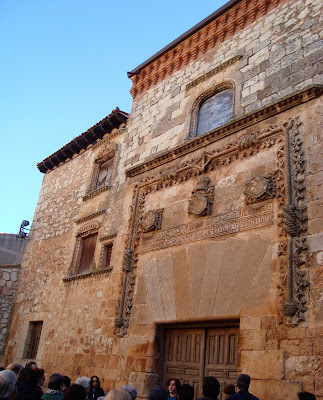 Ayllón is also home to several late Gothic palaces, their facades packed with heraldry symbolism and the Isabelline version of the decorative orbs we saw in Romanesque Santa María de la Riaza. 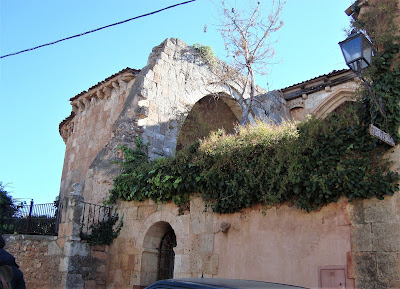 In another part of town, the Church of San Juan might've suffered the same fate as San Nicolás (or worse) if it hadn't been for the passion and financing of Ayllón's native son, Pedro. He loved the ruined church when he was a boy, and always hoped to own it one day. His dream came true when it was threatened with bulldozing, and he saved it. 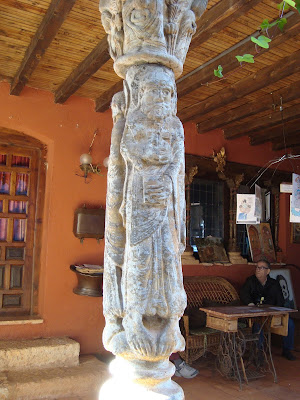 He now lives there and presents art exhibits. A gracious and tireless host, I think he would've put us all up for the night if we'd asked. Many parts of the church are in good shape after Pedro's study and guesswork. 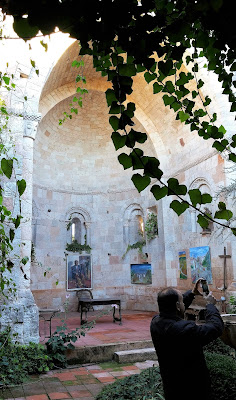 The interior courtyard is made up of a well-preserved Romanesque apse and, to the side of it, a Gothic funerary chapel with many elaborate niches and an unusual five-pointed star. 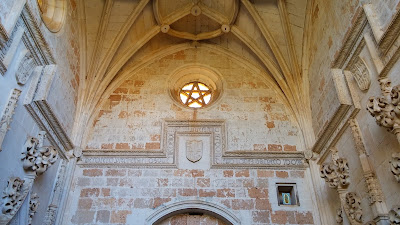 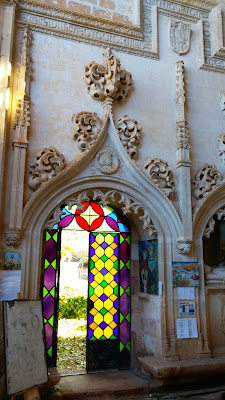 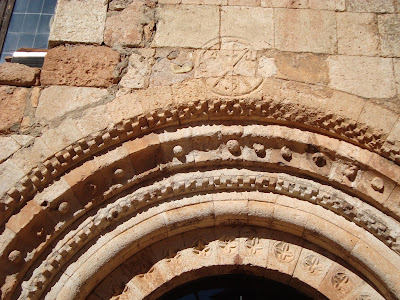 Outside, a ghostly Christ monogram that was obviously and idiosyncratically carved after everything else was in place graces the weathered Romanesque entrance. 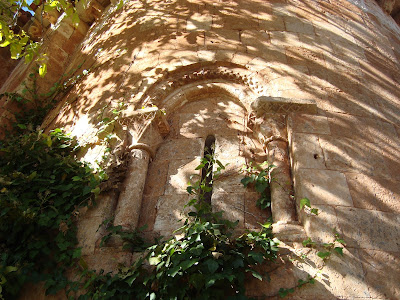 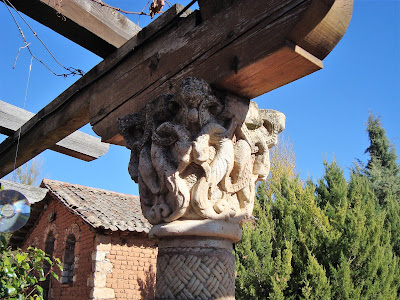 A garden trellis is supported by sirens, saints, and serpents in the vivid column capitals.

After the wonders of San Juan, it was finally time for lunch. We ate a lovely Segovian meal of bean stew, lamb chops, potatoes fried in olive oil, a piquillo pepper, and a millefeuille-type pastry for dessert. I was suffering through my first cold of the season and would gladly have headed back to Madrid to sleep a long siesta in my comfy hotel room, but no, the wonders of the province of Segovia wait for no schoolyard disease. It was time to move on to Maderuelo, which will make up the epic grand finale post, coming soon. For a sneak peek, check out the Arteguías website.