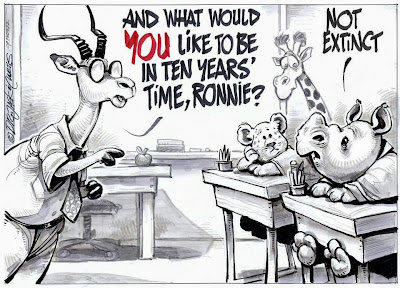 I hope everyone had a happy World Rhino Day yesterday!

I wore my rhino coin necklace all weekend, but didn't have the guts to tell the one person who mentioned how cool it was that it was World Rhino Day. Baby steps for this introvert, I guess.

I also went to the university library to check out books and online resources about rhinos for that novel I've pledged to write.

The biggest activity I took part in was WWF South Africa's #iam4rhinos Tweet storm. This really impassioned me because it's so rare I find something I can really do without money and being so far from where wild rhinos live. The goal was to get one million Tweets by the end of World Rhino Day. I was in suspense for a while, but it eventually became apparent the million wasn't going to happen.
I started on Thursday and got really earnest about on Friday, when I had to do laundry and everything... I was driven. Here was my chance to make a difference! They may not make it, but it won't be for my lack of trying! I even tweeted my entire fantasy story "Not Extinct Yet" in honor of the rhinos. (You can see it in my Twitter feed for Friday, or just buy it for less than a dollar here. The rhinos will thank you!) 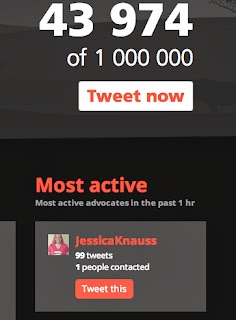 I found myself a top supporter a few times! I was possessed by a higher calling! I was going to single-handedly save all five rhinoceros species from extinction! Don't bother me with other work — what matters more than rhinos? I went to what my social media guru authors call "Twitter jail" for the first time for the sake of the rhinos. And it's somewhere I would go again, gladly, for their sake. Of course, when my husband was home for the weekend, the activity had to calm down or he would feel neglected.

Before this weekend I hadn't sent that many Tweets. I'd say 80% of my lifetime Tweets took place this weekend, for the rhinos.

As of this writing, it's still going on! Try it out! You'll like it!

Being that it's social media, a few experiences accompanied the furious tweeting: I ran across a lot of photos and videos — some sad, most funny or cute, like this one:

I found other media to experience, and purchased this sad story when it was available on Amazon.

I also met a bunch of people interested in helping rhinos however they could — just like me! Up to now, I've been mystified as to what's the point of Twitter. The only people I'd met there so far were in my authors' social media support group. So this was real aha moment! There are ways to connect with people on Twitter beyond membership.

There were a couple of tweets I noticed that (gently) hated on the whole idea. They thought that there were bigger problems to deal with (an opinion they're entitled to) or that tweeting doesn't actually help rhinos. That second one is misguided. I believe the awareness level was significantly raised. There are now a few more people in the world who realize that rhinos are in trouble and are worth saving. A worthy effort indeed.
Posted by Jessica Knauss at 6:01 AM