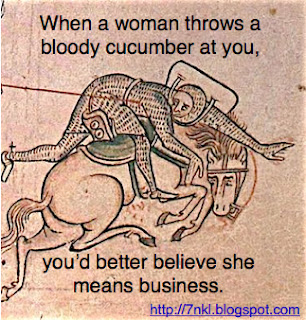 The most memorable scene in the medieval epic on which I based Seven Noble Knights involves the antagonist, Doña Lambra, sending her servant to throw a cucumber dipped in blood at the hero, Gonzalo González. While earning my PhD, I read an article about the possible meanings of this act. Its apparent bizarreness and the way it made scholars scratch their heads so many hundreds of years later planted a seed in my mind. That seed flowered into Seven Noble Knights, 130,000 words of offenses, revenge, lust, love, and Spanishness. (More about the length later.)

So imagine my joy when I found this among my PhD papers:

30. Whoever injures someone with an egg, with a butello, or with a cucumere [two kinds of cucumber], or with any other thing that can dirty him should pay ten aurei if the plaintiff can prove it; but if not, he should clear himself with two of four named from his parish and he should be believed. [The Code of Cuenca (twelfth century) translated by James F. Powers]

It hadn't occurred to me to scan medieval legal documents for cucumber scenarios, yet here they were. Cuenca is a city in eastern Spain, a significant distance away from the area of Lara, where the bloody cucumber takes place in the legend. Apparently, cucumbers were threatening enough to merit legal rules on them in the far-flung reaches of medieval Hispanic Christendom.

Aurei were the more valuable coins of the realm, cast in gold and with legislated weights, so ten of them is not an insignificant fine. It would cover the cost of a donkey or a few goats, for sure. Or in this case, the cost of a new wardrobe. The key here seems to be the dirtiness and the difficulty of getting clothes clean in the twelfth century.

The exact same penalty and means of acquittal are prescribed for anyone who creates a slanderous ballad about someone else. Here the soil falls upon the subject's reputation, and that is even harder to clean than a twelfth-century shirt.

The seriousness of the cucumber crime in the lawbooks could make me believe the uproar in Seven Noble Knights is well earned. But let's compare the ten aurei to some other fines for offenses in the same section of The Code of Cuenca.

Anyone who breaks someone's arm or leg should pay 50 aurei, and if the limb comes all the way off, 100. A lost limb is worth ten times a ruined shirt. Acquittal for the limb requires twelve witnesses or trial by combat, a much bigger burden than the two of four witnesses required for cucumber throwing.

Scalping someone's beard will fine you 200 aurei—now we're getting into penalties that could buy five or more horses or a small house. It also costs 200 aurei (and exile) to force a stick into someone else's anus. Loss of beards and violations with foreign objects are exponentially more serious than throwing a cucumber.

In Seven Noble Knights, the cucumber incident results in the life and death situations that propel the story forward. As we see in the lawbooks, it's actually a pretty impotent gesture to merit such a response. Perhaps in the tenth century, when Seven Noble Knights takes place, it was that much harder to get a shirt clean? Or is there more going on here? Perhaps some of the lust and revenge I mentioned earlier?