Something Red by Douglas Nicholas 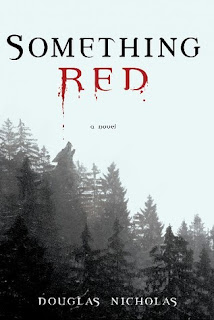 I read this book very slowly, partly because of other commitments, but also because it begins as if it were a snail at the races. It's easy to put down in frustration, because the language is difficult, even for someone like me, who has spent an inordinate amount of time thinking about the thirteenth century. When the travelers are finally attacked by bandits, the author interrupts the action with the kinds of descriptions we've already read so much of: the mechanism of how to secure the carts so the attackers can't make off with them, what kind of arrow they're using, and how and when they were made.

Tenacious readers will be rewarded with a middle that reads like a horror movie: the characters get caught in a kind of mousetrap, in the snow, with dead bodies at every pass, and despite Molly's ability to deal with anything, it's possible to believe for a few moments that they're all going to die, either frozen or brutally murdered (and then frozen).

Especially tenacious readers will be rewarded with an ending unlike any other part of the book, and yet satisfyingly inevitable and maybe a little wistful. The ending will stay with me for a long time as an example of how to successfully end a complex book.

The book ends up working really well. Somehow, the reader cares about the characters that have come through so many words. Molly, Jack, Hob, and Nemain seem real and strong, and as if they have much more story to tell. The male/female balance of power and Molly's popularity were a pleasure to read about.

There is an obvious poetry to the language, and I enjoyed feeling as if I were actually living in the thirteenth century through the author's conjurings. The fantasy elements weave seamlessly into the history (it's been said before, but there's really no other word for how smoothly the two supposedly opposing elements meld). If you already have a thorough knowledge of the vocabulary of thirteenth-century English and Irish traveling life, or of you don't mind learning, this is the book for you.
Posted by Jessica Knauss at 12:29 AM