The Next Big Thing: The Seven Noble Knights of Lara 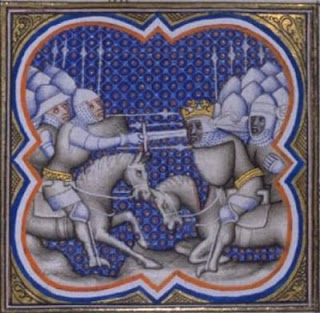 The latest game for authors in the blogosphere is to tag each other for The Next Big Thing. Kim Rendfeld, who writes early medieval fiction, tagged me. The authors answer a list of questions about their works in progress in anticipation of sharing their work with the world!
The questions:
What is the working title of your book?
The Seven Noble Knights of Lara. It recently occurred to me that using the medieval title might not satisfy some modern readers, who might expect said seven knights to play an even larger role than they do, but I have no idea what a better title would be.
Where did the idea come from for the book?
I read the "historical accounts" of this story in grad school and it has no ceased to haunt me. The historical accounts are based on a lost epic poem, and perhaps it's that lostness that fascinates me.
What genre does your book fall under?
Historical fiction. There are some fantasy elements in the original that I'm explaining with realistic causes.
Which actors would you choose to play your characters in a movie rendition?
I would like unknown actors to play the young characters. I'd die of happiness if Mandy Patinkin played one of the older characters -- perhaps the Count of Castile, Muño Salido, or even Ruy Blásquez, the evil man himself. Zaida should be played by someone as beautiful as Aishwarya Rai, but none of my other favorite actresses fit the type my characters need.
What is the one-sentence synopsis of your book?
Teaser: A medieval epic with strong women, valiant knights and a bloody cucumber.
Synopsis: When a tenth-century noble Spanish woman suffers a gross affront at her own wedding, her blindly loyal husband wreaks a bloody revenge that will devastate the nation with an unstaunched conflict spanning 15 years. (Needs more work.)
Will your book be self-published or represented by an agency?
I'm deciding between aiming for a small press or trying to get a literary agent. Being a publishing world "insider," I understand my options, but am not sure what will work best for me.
How long did it take you to write the first draft of your manuscript?
I started in 2007, but that draft was so bad I don't even count it. This true first draft has occupied me constantly since early 2011, and I hope to finish before the turn of 2013.
What other books would you compare this story to within your genre?
Within the genre, I think it's most similar to The Cross and the Dragon by Kim Rendfeld, but I hope to be able to read some more medieval fiction and flesh that out a bit. In my "pitch," I compare the revenge dynamics to nothing less than The Godfather and the amazing historical details to María Rosa Menocal's The Ornament of the World. That's pretty bold for me, but they told me I had to pick something, so...
What else about your book might pique the reader’s interest?
There's love, lust, insanity and loads of rage. A couple of characters I created from scratch to support the main characters have captured by beta readers' hearts. You won't want to miss lovely, downtrodden Justa, handsome Adalberto, and practical, inscrutable Yusuf. Different attitudes about the monetary value of human life and the role of sex will fascinate any curious soul. Readers may also find descriptions of opulent, glittering, medieval Medina Azahara and cataract surgery that's not much less sophisticated than today's to be of interest.

I tag the following Next Big Things:

Email ThisBlogThis!Share to TwitterShare to FacebookShare to Pinterest
Labels: history, my work, Seven Noble Knights, why I write about the Middle Ages, writers I admire