Meet the Character: The Hero, Mudarra

Who will everyone be dressing up as for Halloween next year?

Mudarra, the hero of my epic novel of medieval Spain, has been gracious enough to sit down with me for an interview, and it will appear on Seven Noble Knights' release day, December 15, at History Imagined. Today, get a few of the details about this fascinating individual.

1) What is the name of your character? Is he fictional or a historic person?

Mudarra González ibn Zaida is a fictional character with a lot of history. He’s the talented but reluctant hero who rises up in the second part of Seven Noble Knights, which is based on the lost medieval epic poem Los siete infantes de Lara. The first part of the story includes some verifiable historic characters, such as the Count of Castile, García Fernández, and the members of his court, Gonzalo Gustioz and his wife Sancha (Prollina in the history books). The inciting incident also has a whiff of truth to it. It leads to such widespread destruction that in the second part of the story, no historical person remains to carry on the cause and complete the revenge. Because a sense of eye-for-an-eye justice was so important to medieval storytellers, they resorted to making up a character from (semi-)plausible circumstances in order to deliver the ending their audience craved. Mudarra is that semi-plausible hero.

In the medieval epic, Mudarra is one-dimensional, so it has been my pleasurable task to make him complex and sympathetic. In the end, his doubts and decisions cast new light on all the events of the first part and make it, I hope, worthwhile and enjoyable. 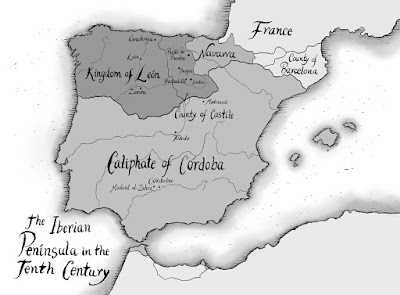 2) When and where is the story set?

It might have been interesting to try and transfer the characters and worldview to another time period, but because I love medieval Spain so much, I researched what the most likely year for the inciting incident was in real life, and settled on 974. I’ve since done more research, and that date could be a tad too early, but in planning the sequel, it actually works better for the story than a more accurate historical date would have.

In 974, Castile was not yet the dominant kingdom on the Iberian Peninsula. In fact, it wasn’t a kingdom at all. The most powerful earthly authority was the count, and technically he owed allegiance to the Kingdom of León. Other kingdoms battled for dominance in the north at the same time that they maintained complex, on-again, off-again diplomatic/warring relationships with al-Andalus, the unified Muslim caliphate that occupied more than half the peninsula in the south.

3) What should we know about him?

Mudarra grows up in the Andalusian capital, far from the Christian lands he’ll have to take a vested interest in during the course of the second part of Seven Noble Knights. Although intensely trained in the arts of war from both the theoretical and the practical standpoint, his life of sensuality, peace and privilege has not prepared him for the trials that await in the barbaric north.

4) What is the main conflict? What messes up his life?

The overarching conflict in the second part is the feud that started in the first, which insinuates itself into Mudarra’s idyllic life. He must reconcile whether or not to answer the call to revenge with his own sense of right and wrong, and puzzle over exactly how these decade-old events have affected his life.

The conflict becomes intolerably complicated when Mudarra meets the daughter of his supposed enemy and falls head over heels in love with her.

5) What is Mudarra's personal goal?

Once he meets Blanca Flor, Mudarra’s only goal is to be with her. His life has been turned upside down, and he’d like to start over again with his true love by his side. He needs constant reminders of his obligation, what should be his goal, to take revenge against her family. It’s all tremendously confusing for him. In the end, only one of these goals is accomplished, and I’m working out how he’ll overcome obstacles to meet the other one in the sequel.

6) Where can we read more about Seven Noble Knights?

You can read much more about it and how I came to write it and complete it at its web page and at this retired blog.

7) When is Seven Noble Knights available?

Seven Noble Knights will debut from Bagwyn Books in softcover and ebook December 15, 2016! I hope to share preorder links soon.

In the meantime, consider entering for a chance to win one of ten Advance Reader Copies!