Bullfighting in My Time

When I first started to love Spain, I loved bullfighting right along with it. I loved the spectacle, the daring, the honor. The complex structure and the different opportunities each fighter had to show his prowess were fascinating, and the culture of poor young men (and more recently women) being able to make it big through talent, guts, and life-risking seemed like a fairy tale.

In the summer of 1998, I went to the Maestranza bullring in Sevilla every Sunday to sit in the sweltering sun and see the apprentice bullfighters get more kills under their belts, with mixed results. Even at its goriest, the whole ritual was a heady thrill to me, inflaming all my sensibilities that preferred "Spanishness" above all. None of the American students in my group went with me. None of them had the same sense of Spain that I did. I took my mother in September 2005 and leaned forward to get a better look when she covered her eyes. 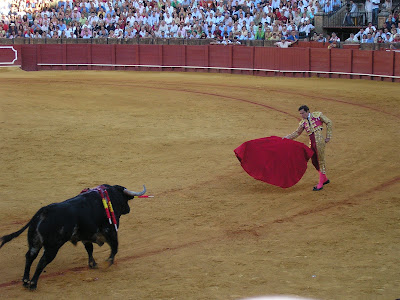 If anyone asked how I could conscience such a practice, I argued the following:

• The bull represents a Roman god who must be defeated. This is a battle of good versus evil that will continue in some form for all time.
• The bulls live fantastic lives, free range, doing what they like, for years. The end of that charmed life is unpleasant, but it's short.
• Sure, the bull always loses, but sometimes the man loses, too, so it's not as unfair as you would think.
• The meat is not wasted, but served as food in the bars around the bullring. You might as well get a spectacle out of the necessary butchering.
• There is no way to love Spain as much as I do and not like a good bullfight. It's the single most Spanish institution, period.

The Canary Islands banned bullfighting in 1991, but that could hardly threaten my sense of cultural unity, because the Canary Islands sit far away, off the coast of Africa. Catalunya's 2010 ban (effective 2012) didn't phase me, either, because Catalunya is an autonomous region with its own language and which has never desired to appear culturally attached to the rest of the peninsula. 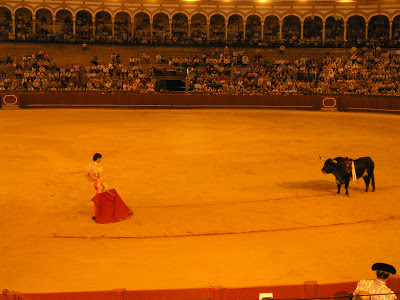 But this year I finally woke up to hypocrisy of enjoying los toros while being outraged to the core that precious, rare, rhinoceroses are all too routinely killed for sport and monetary gain. I can easily argue against my previous self:

• A real, live bull represents only himself.
• There are many ways beef can be butchered without causing terror, rage, and profuse bleeding in the animal. Terror, rage, and bleeding are all things we could do with less of in the world.
• Any game with the threat or certainty of death of either party belongs in the realm of fiction, not the real world.
• It's insane to enjoy watching death, whether the meat is going to be used later or not.
• In the final analysis, one does not need to recreationally kill bulls to prove his or her Spanishness.

There is a whole industry built around bullfighting, and far be it from me to want to put even more Spanish citizens out of work. But inevitably, the practice will fade and I'm now on the side of those who hope it will fade sooner rather than later.

In the future, I will only go to a bullring to attend musical events. (Yes, bullrings can be used for any stadium-type event! No waste of architecture! I also think the bullfighting museums should remain open to keep that part of history fresh in people's minds.) I can't wait to go back and investigate what exactly the essence of Spain involves, now that bullfighting is out of my mental picture!

Update! OMG! The greatest Spanish singer-songwriter went to the bull festival opening day, March 2, in Olivenza! He looked incredibly dapper in the stands. 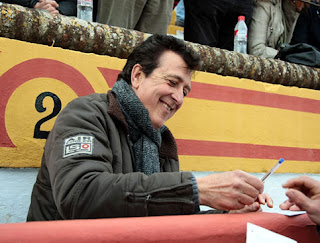 If going to a bullfight was the only way I would ever be allowed to sit next to Manolo García, I have to admit I'd be there with bells on! We all have a price.