Awash in Support? What I've Learned from My Kindle Scout Campaign 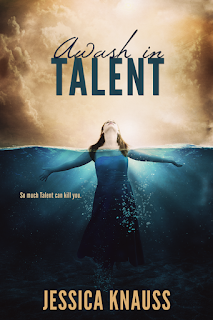 It's down to the wire. Tomorrow is the last day to nominate Awash in Talent in the Kindle Scout program. The campaign ends at midnight EDT February 28/29, so if you're looking at this on Leap Year Day, you've missed your chance.

On Leap Year Day, I'll look at my final figures and keep my fingers crossed that someone at Kindle Press loves my dear unusual Awash in Talent enough to publish it on its own strengths and on the support I've been able to muster. Because although a high number of nominations is probably interesting to Kindle Press, the human beings who staff it have the final say as to whether they'll put the time and effort into ensuring any book's success. It's a great policy for quality assurance—I know as a publisher that we can't give our utmost to a book if we don't adore it. There's too much hard, annoying, nasty stuff that goes on behind the scenes of publishing. Without the love, it isn't worth it.

I'll also reflect on the things I've learned during the Kindle Scout campaign. During this grueling month of trying to get the word about Awash in Talent to the right readers, I've learned more than I can possibly express here. Some of it was technical, such as how to pin a Tweet to the top of your profile so it doesn't get lost in the all the retweeting support you're happy to do for other authors. Some of it was basic marketing, such as how a good book cover can keep a book trending, but it's got to already be trending, because people can't be drawn in by a cover they don't see.

Most importantly, I've learned that if you ask a person a favor, they won't do it for you unless there's some love between you. In the past, I've had some positive outcomes from going outside my comfort zone to ask for what I want. This time around, I asked a few media outlets to cover Awash in Talent's Kindle Scout campaign, outlets I thought might have an interest because they love Providence as much as I do. Mostly I got frozen out. The few I got responses from weren't willing to share the link because it felt like advertising. Is it advertising when you're looking for nonmonetary support? When you wish to share your enthusiasm for a place with people you think also might be enthused? I must not have offered enough benefit to these outlets. Because there's another side to the story.

The first time Awash in Talent was "Hot & Trending," at the beginning of the campaign, was the direct result of an email I sent to an exclusive circle of about 30 people. All were either related to me by blood or love, or we had a mutually beneficial working relationship. Their support at this crucial time gave me a warm and fuzzy feeling I'm not accustomed to. They like me! They really like me! All I had to do was ask for their support and they gave it. Those are some endorphins!

I think there was quite a bit of helpful sharing going on from this group, but the only evidence I have is that my brother and brother-in-law mentioned me twice on their popular podcast (Episode 19, minute mark 13:22 and Episode 20, minute mark 13:56).

The Crazy Mind interviewed me and produced some scintillating conversation, too.

The second, even more spectacular, and apparently final spell of "Hot & Trending" was another direct result of asking for support. This time, the group I asked was my high school graduating class. I didn't expect the beautiful outpouring of faith, and it was beautiful. I'm so moved. I think perhaps the connection between human beings becomes really strong when you've spent hours and hours in a room together, as you do in school. The connection lasts a long time, too, because I'm not exactly a recent high school grad. I feel inspired to do a book event or two in my hometown area now, so I can be with my amazing supporters, and get some more endorphins.

I'm also doing that thing the publishing industry declares necessary for building a relationship with new readers: starting a newsletter. You can sign up for my newsletter by putting your email in the box at the top of this post or at this cute page. You likely won't receive anything for a month or two while I sort out the chaos of my writing life. When those rare messages finally come, you won't regret having signed up.

Just to remind you, midnight EST on February 28 is your last chance to nominate Awash in Talent. You'll think it's worthwhile if you like books with heartfelt, developed characters and unpredictable plots, Rhode Island and other exotic locations, fantastic powers, and realistic yearnings of the heart. Emily, Kelly, and Patricia are characters whose story demanded to be told, and who would love to meet all you wonderful readers in the published book.

If you haven't done it yet, you can still be my personal hero by nominating Awash in Talent or by sharing the link with readers you think might enjoy it via social media, email, phone calls, anything that works!

Whatever the outcome, I know I've done everything in my power. That doesn't stop the nerves, though! Thank you so much for going through this challenging experience in hope with me.