New Life: The Trip of a Lifetime, Part 13 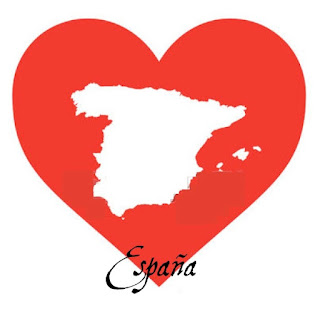 It was June 2016. Stanley and I were waking up to bright blue skies and doves cooing in Arizona. For an instant each morning, I could fool myself into thinking I was still in Spain, on that trip I wish had never ended. Arizona will always live in my heart, especially now that I don't live there, but the disappointment was palpable, the lighting angles all wrong, the smell of the air off somehow.

I've lived in quite a few places, and geography has been a central preoccupation in my life. After I first traveled to Spain, when I was sixteen years old, I noticed a tiny seed of anxiety that I imagine in a manner similar to traditional depictions of the angel and devil hovering over a decision-maker's shoulders. As I moved east and west, north and south, and across the Atlantic for education, employment, and finally to be with my roaming true love, that anxiety devil grew from a seed and blossomed into something formless but huge.

I had a lot of freelance editing work that June, and as I pounded away at the keyboard in the little study I so appreciated for the short time I had it, I cogitated on this eternal geographical anxiety in the background. I noted that it affected my mental state at all times. It calmed down quite a bit when I spent time with Stanley and especially when we purposefully centered ourselves in the present moment. But maybe, just maybe, a physical place existed beyond that anxiety's reach.

Looking through the photos and videos from our Trip of a Lifetime, I came to one of those realizations that break the world open, that energize you and let you see new possibilities: I had an epiphany. I leafed through some old journals and photo albums and confirmed my suspicion that this new truth wasn't run-of-the-mill traveler's regret. Someone once told me I was born in the wrong country, and I was only beginning to understand how true that was.

Stanley was parked on the couch in front of the TV, a place he'd been more often than not lately, but I was too wrapped up in my epiphany to notice. I went out to him and spoke from my heart. "Spain is the only place I ever feel at home, the only place I don't feel as if I should be somewhere else." Over the course of the next half hour, with tears of emotion, decision, and joy, we hashed out some of the feasibility of going to live in Spain. I was convinced his visa would be easy as a retired person; mine, as a "working person" (a productive member of society or a drain on it), would be much more difficult to obtain. Stanley hadn't been feeling well—that's as much as he ever said—and all this was overwhelming at the time, but he agreed that we would look into it and figure it out "as soon as you get better," as I so naively put it.

I felt better because I always feel good with a plan or even a plan for a plan. My true love, however, never did feel better.

Without going into too much detail, he entered the hospital about a month later on a Friday. Stanley's sister flew in to help, but she considerately left me alone to chat with him his first night in the ICU. I played him several of his favorite Manolo García songs on his phone. In all the emotional strain, I was convinced that Stanley was now in a position to understand the Spanish in the songs perfectly. And so I closed the Manolo García bookends of our marriage.

Then I told him I'd found a program through which Americans could teach English in Spain, and that if he needed to leave, he didn't have to worry about me. I would be living the dream. Everything else he already knew.

The following Friday in the early morning, barely a week after arriving at the hospital, Stanley passed away. I have no working memory of much of anything that happened for the following four to six months. In spite of my best efforts, my life has become increasingly difficult and meaningless since then. But I had the resilience to undergo the complex, all-in-bureaucratic-Spanish application process for the teaching program I'd promised my husband I would apply for.

That small but epic act of hope has come to fruition. I'm just getting started with what promises to be a long and winding road, but barring further catastrophes (Have I had enough yet? Please?), this autumn I will start an academic year imparting my English expertise in a high school in Zamora.

This feels like exactly what I should do. Much more about this magnificent location in later posts.

Catch up with the rest of the posts in this series here.