Galician Romanesque, or Santiago and His Pilgrimage in La Coruña

I recently had the opportunity to visit La Coruña. I faced wind and rain (What did you expect? It's the coast of Galicia.) to investigate the Romanesque style at what was, in the European Middle Ages, the edge of the known world. 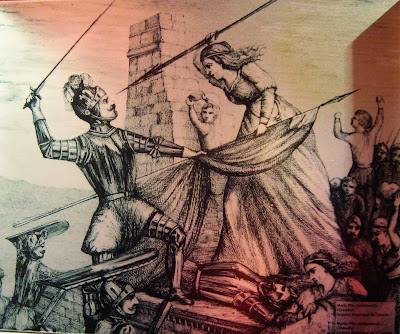 While in this seaworthy and fascinating corner of Spain, I learned about a Renaissance episode that drastically affected how we can appreciate La Coruña's medieval art. In 1589, the English besieged the city as a revenge for the Invincible Armada's attack in 1588. (Sore feelings even after soundly trouncing the Spanish navy and starting a long period of historical decline? How much reinforcement do you need, England?) The soldiers of La Coruña and its local citizens turned the English away, but before the siege, the city boasted five Romanesque churches and a monastery; when it was over, only two Romanesque churches remained in the city proper. (You can guess how I feel about his instance of history obliterating history.) 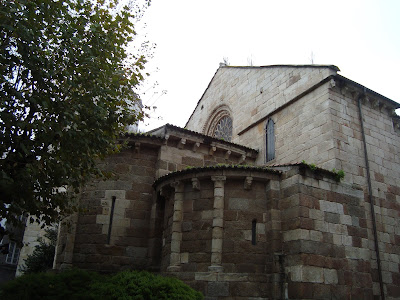 Santiago (Saint James the Apostle) is the oldest of the surviving church buildings, having been first constructed in the second half of the twelfth century in the same "Mateo" style as the Romanesque Cathedral of Santiago de Compostela. The ground on which it stands has been hallowed for a very long time, perhaps as early as the tenth century.

This church was established as the beginning of the walking Camino (Santiago pilgrimage) for English pilgrims arriving in Galicia by sea. It was restored multiple times in the medieval era because of fire damage, which makes the structure a historical record in itself. Fortunately, the original apse area, as we see here, survived to display the particularities of Galician Romanesque for visitors today. 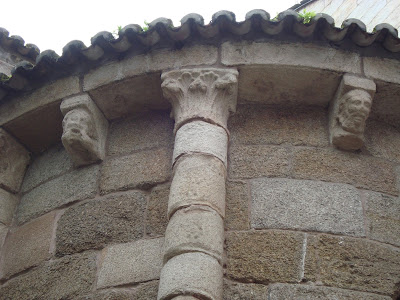 The outside of the apse has many delightful corbels. Here, a bearded man and a man pulling at his mouth. 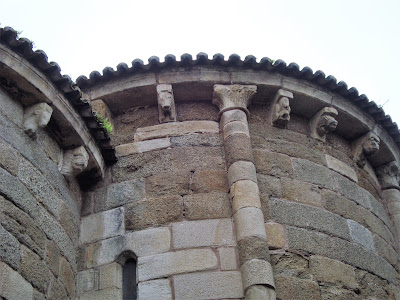 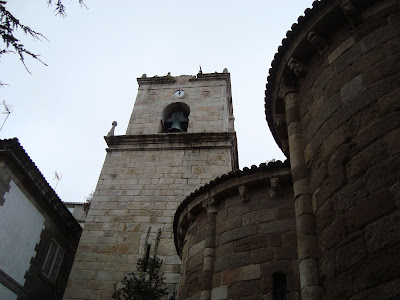 This building embodied the bond between the medieval Church and State. As late as 1521, this church had two towers: the surviving one here (this version constructed in 1607) with the bells and clock, and a second one that held munitions, archives, and other city government items the town hall didn't have room for. For more than one hundred years from the fourteenth century, the temple also served as the city council's meeting place. 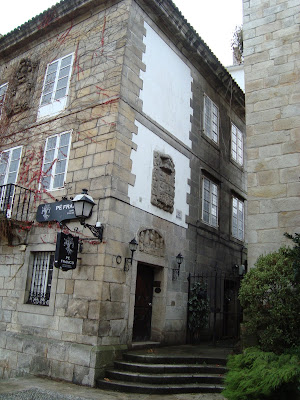 The shortest street in La Coruña is found between Santiago's tower and the old consulate building, which has a Renaissance coat of arms and interesting Romanesque Resurrection, both taken from other, unknown sites. 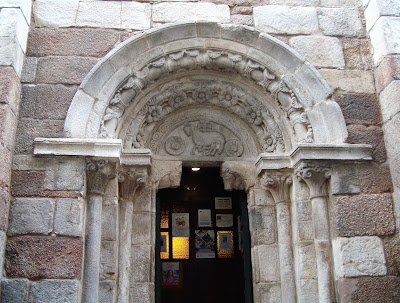 The first thing I noticed about this lovely north doorway is that the door itself is square, as in other churches, but the door jamb has extra symmetrical decorative elements, giving the top an indented look I found repeated in the other two Romanesque churches I saw in La Coruña. The indentations are oxen heads, which in close proximity to the Lamb of God in the archway, represent the triumph of Good over Evil. The archway is better preserved than most other areas of this church and features many attractive flowers as well as the Lamb, both much in the "Mateo" style. 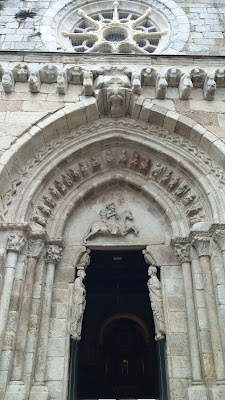 The front entrance displays features from different medieval styles, as well as evidence of where the other tower used to be. The pointed main arch and rose window are from the end of the fourteenth century, but still copy the much venerated "Mateo" style. Christ shows his wounds at the arch's apex, and the interior of the arch and the rain ledge are resplendent with seated angels. 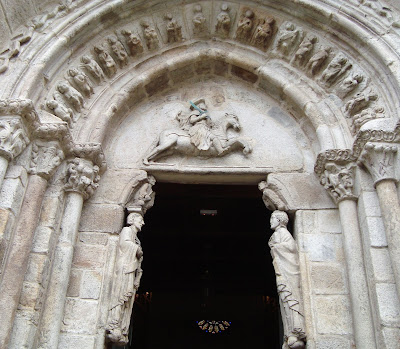 It's only natural that the church of Santiago should sport an image of that saint at its entrance. However, the vast empty space around the horseman and the modern look of his boots are sure signs that something else originally occupied the space where Santiago now gallops in search of Moors to slay. This figure is indeed later than anything else we've seen so far, from the sixteenth century. His metal sword has had time to turn green in the Galician weather, giving him a lightsaber-y pizzazz. 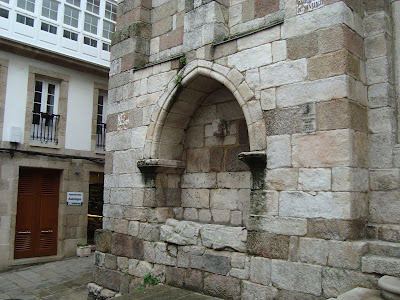 A Gothic-style tomb has been cut out of the front wall. 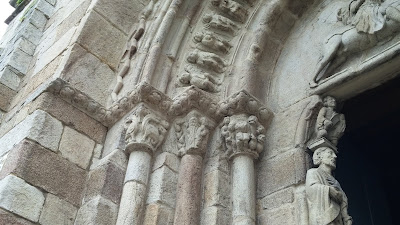 On this side, the magnificent although eroded column capitals show twisting dragons (the Devil), an angel, and a scene that was popular in Romanesque times, Daniel in the lions' den. Although Daniel himself is mostly missing, four lions and the figure of Habakkuk accompanied by an angel make it unmistakable. 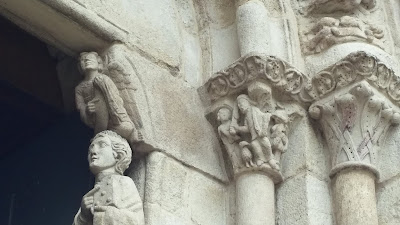 The plant-themed column capitals on the other side are finished off with a story that's not often seen in Galicia, but this blog's readers have seen before, also closely associated with Daniel in the lions' den: the sacrifice of Isaac. Abraham wields a sword, which an angel takes hold of to stop him turning toward Isaac, crouched and tied up behind him. Between the angel and Abraham, the sacrificial lamb ready to replace Isaac on the altar saves his life.

On both sides of the door, angels with scrolls create that signature Coruñan shape. Below them, we have additional figures, elongating the indentations. These have both been carved in a Gothic style that harks back to "Mateo" to beautiful effect. The figure on the left is Santiago, bearded and with a pilgrim's walking stick. The younger beardless man on the right is probably Saint John, pointing to the gospel he wrote. A closer look reveals that his head has been replaced, as the angle is slightly uncomfortable and the stone a different color. As it still successfully copies the "Mateo" style, albeit with Gothic waves in his hair, it was probably replaced no later than the fifteenth century. 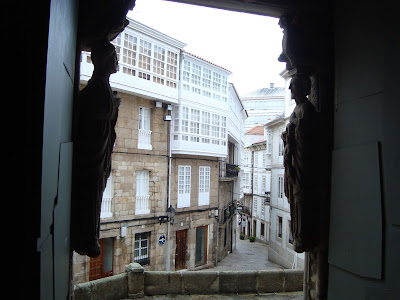 From the inside, Santiago and John appear to float over the street even as they guard the entrance. 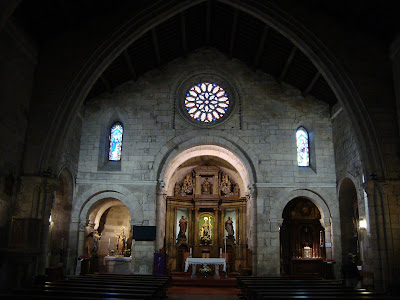 Gazing toward the main altar, Santiago reminded me of San Cipriano in my Zamora. Like that temple, it used to have three parallel naves that were turned into a single large nave in Gothic times to create the sense of spaciousness so favored in that artistic period. 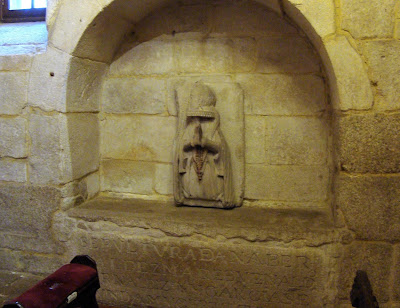 The church features many seventeenth-century burials, of which this is the most striking example. This noble lady and her husband are portrayed as praying figures, both with their heads turned drastically to face the altar of their devotion. 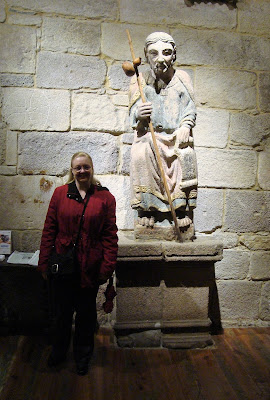 This life-sized Saint James survived the medieval fires in the apse and has been moved to the foot of the church, where I stand for perspective. I'd seen a photo of this image before I arrived, and was pleasantly surprised by the presence it exuded because of its size. 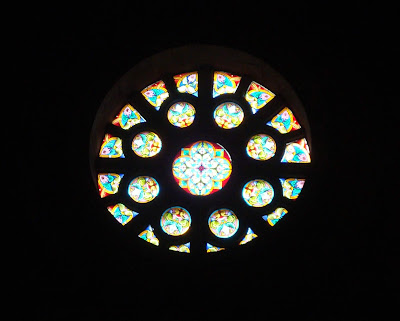 The stained glass in the rose windows was placed at the turn of the twentieth century but blends in harmoniously with the medieval architecture. 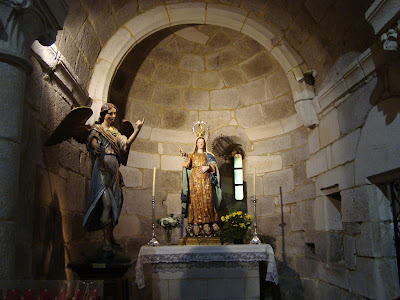 In the well-preserved side chapel, a figure of the Virgin Mary, pregnant with the Son of God, is venerated. Such figures are often called Our Lady of the O, because of the surprised reaction they illicit. 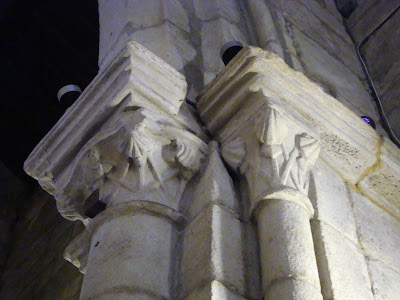 Lest we forget the whole point of this building, these column capitals remind us of Santiago and his pilgrimage with the symbolic shell. 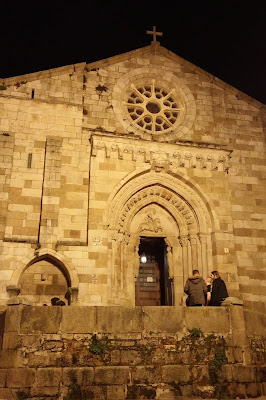 Santiago is a well-lit place to hang out in the evening. 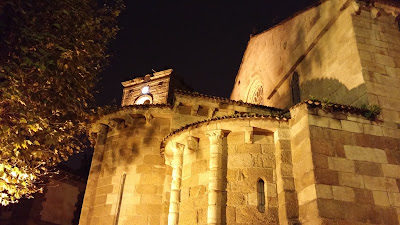 The blogs Galicia Pueblo a Pueblo and Aquivoltas.com were essential resources for this post.

Posted by Jessica Knauss at 2:42 PM No comments: