I'm back to blogging after an inexcusable absence. It's time to catch up with all the beautiful things I've been seeing since I got to Spain last September!

It was November, and hadn't rained in Zamora for more than a year. Imagine my surprise when I took the bus only a few hours north to get immediately and thoroughly soaked. And I had a(nother) cold. But, as seen in this previous post, I didn't let those accidents of nature stop me.

After walking one kilometer, huffing and puffing, and being overwhelmed and thrilled with San Julián de los Prados, it was time to sit down in the nearest plaza and call a taxi. I was finally going to a place I'd always thought was in the middle of nowhere. All the photos I'd ever seen and the awe with which the buildings were described suggested they were hard to get to. As it turns out, Naranco Hill, home to two mega-important ninth-century monuments, is not even a suburb of Oviedo, capital city of Asturias. That said, it was probably two kilometers uphill, and in my weakened viral state, it was just as well I took a taxi so I could enjoy it more. 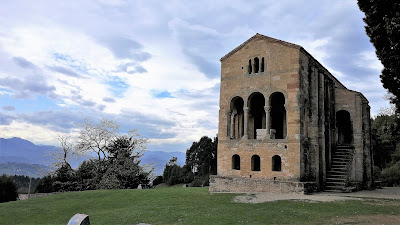 The first unique contribution to Asturian culture sits on the hill, visible from the city, just like any of the other houses on Naranco... 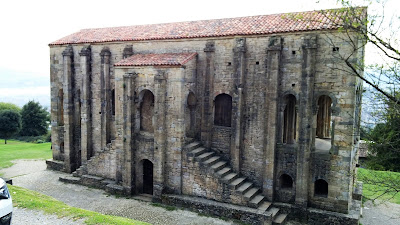 ...but it is that rarest of architectural creatures, a medieval building for non-religious use! Even rarer, it's the most beloved example of what the Asturians call pre-Romanesque architecture. Named Santa Maria del Naranco hundreds of years after it was first built, it's survived in great condition! 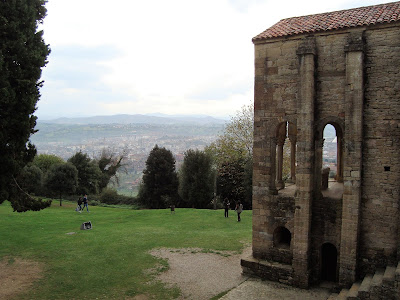 Ramiro II (mid-ninth century) had this palace built with commanding views of the city below. To go inside, you must be accompanied at all times by a guide who gives an informative tour. The other Naranco monument (see below) is included in the ticket price. 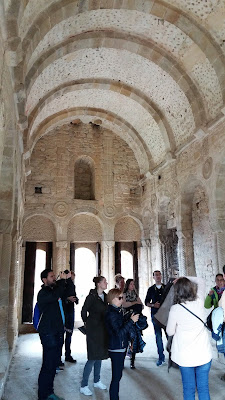 This is the first building to successfully mount a vaulted ceiling made of stone. Previous vaulted ceilings were always made of wood, a much lighter proposition. But once an architect figures out a technique for stone, even a first creation can last well over one thousand years. Other clever architectural features abound here, and it's little wonder, as this palace was built expressly to host dignitaries and grandees from near and far for policy and diplomatic meetings--and parties. It wasn't a residential palace, but a place dedicated to making an impression. 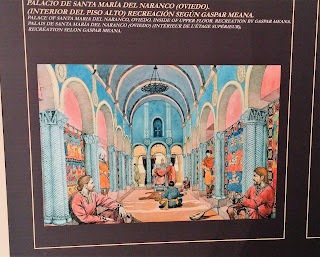 In this artist's rendition of what the palace looked like in Ramiro II's day, we're reminded that the walls were probably painted with bright colors and hung with tapestries, although some dignitaries would still have sat on the floor so as not to sit above the king. Pillows hadn't made it to this part of northern Spain before the ninth century. 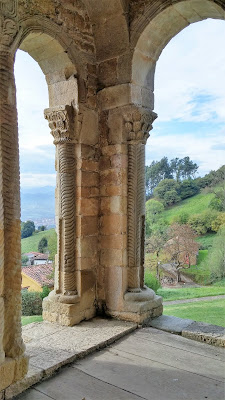 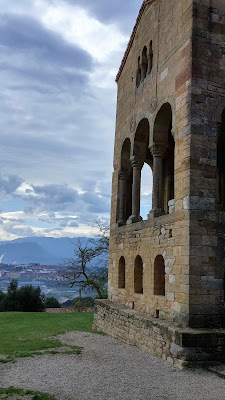 It has two arcaded porches that are so lovely, I can't understand why this style hasn't been imitated more often. 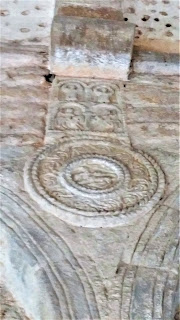 The decorations are subtle, uniform, and surprisingly influenced by the Middle East. I can't help but see the queen's taste reflected here. It was likely the queen's duty to make sure everyone had a good time, and such an important job required sophistication and education as well as instinct. 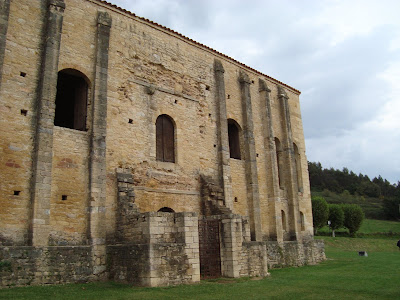 Here there used to be a balcony from which the king and his guests could contemplate that commanding view. 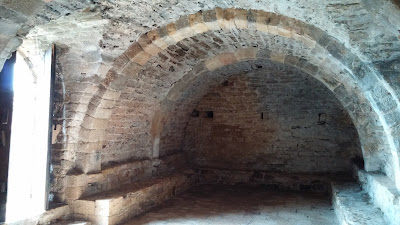 While the top floor was clearly for important meetings and government, the guide presented the bottom floor as more of a mystery. It looks like a crypt, but there are no burials.

It was probably a cellar. You needed to store a lot of wine to entertain that many dignitaries. The cellar also has a successful vaulted ceiling in stone. Trust me, this is impressive stuff! 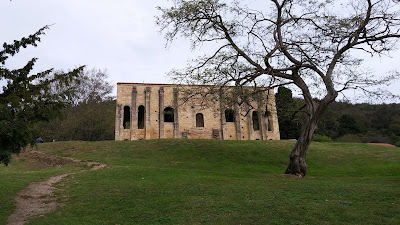 A clever architectural trick: See how the arches are longer and narrower at the ends? When you're inside, it creates the illusion of great length. 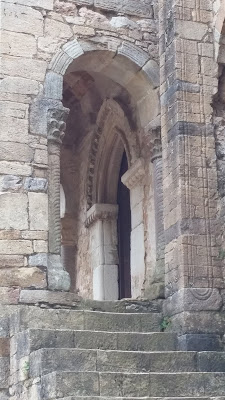 Note the fine detailing in every element. Even the columns are carved to look like drapery.

When I have millions of dollars, I'll add some similar details to my writers' retreat castle/palace. 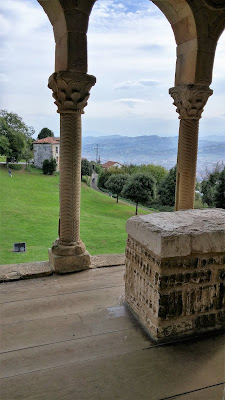 An altar was placed here a few hundred years later, when the palace was consecrated for religious use and given the name Santa Maria. 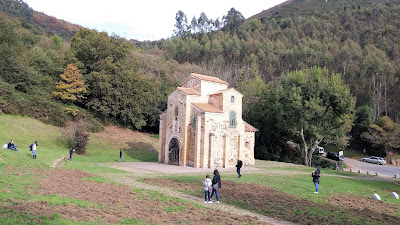 Is this blast from the past overwhelming your senses and imagination? We're not done yet. Just a bit farther up the hill, close enough for easy access by the king and his guests, we come upon San Miguel de Lillo. Again, photos gave me the impression that this building was in the middle of a field far from the madding crowd. It was a special pleasure to realize it's within easy reach of any able-bodied Oviedo-dweller. 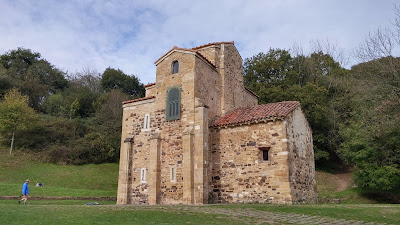 San Miguel's floor plan is a lot smaller now than when it started out in the middle of the ninth century. It's probably one-third its original size after a collapse in the eleventh century. It gives the impression it's been squished in from the sides, but it's still precious and rare, one of only fifteen examples of Asturian pre-Romanesque architecture that survived the centuries. 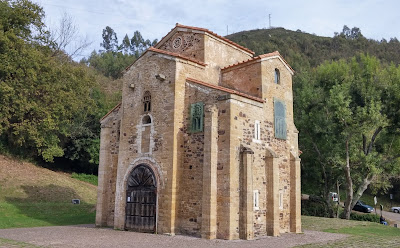 They didn't let us take any pictures inside because too many people have been unable to follow the simple request not to use flash. Trust me, it's chock full of column capitals, column bases, and friezes that transport you to the ninth century, if you aren't there already.

In the doorway, a frieze depicting circus performers, influenced by Roman wall art via Byzantium, is unique because it's the only non-religious artwork that has been found in a church of this period.

Although not on the scale of San Julián de los Prados, there are some deteriorated paintings here that are the first depictions of the human form in Asturian wall art. They look similar to the people in mozarabic manuscripts and are probably a direct inheritance from Visigothic art. 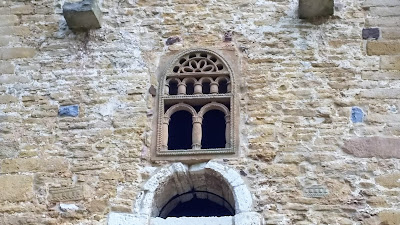 They carved the jalousie windows out of one single block of sandstone each! A marvel of engineering and sculpture. This is a modern reproduction; the windows shown in the photos above with a plate of glass protecting them are originals. 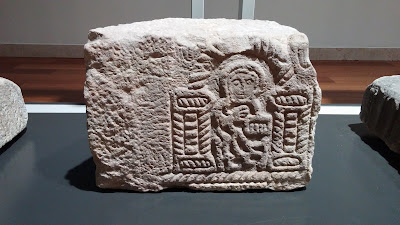 In the Museum of Oviedo, this is a column base from the same era and in much the same style as the column bases in San Miguel de Lillo. I love the exotic look, reflecting the same taste as Santa Maria del Naranco. 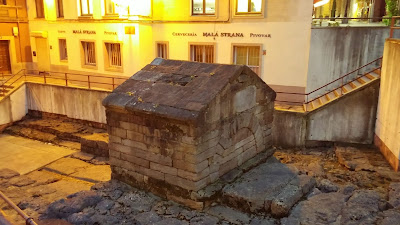 Now that we've returned to the city center, it's a good opportunity to take a look at the last of the four monuments from Oviedo's first heyday. This fountain/well that supplied the city with clean water is the only public civil construction that survives from the ninth century. Although it was outside the city walls at the time, it's now mere steps away from the nightlife/cider district. Here you can see how the ground level has risen over 1100 years. 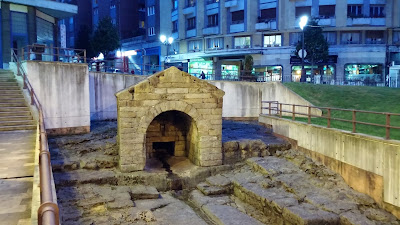 The engineers built Foncalada to take advantage of a natural spring. 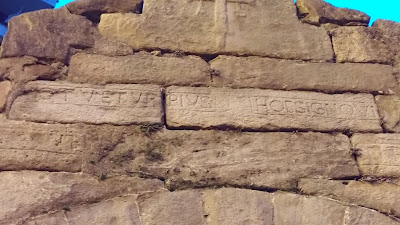 Carvings include the Asturian cross with a blessing to protect the well: "This sign protects the pious. This sign defeats the enemy." I know I feel safer about Oviedo's water, reading that!

I saw many more exciting, unique things in Oviedo. It's impossible to exhaust its medieval wonders, and if you like cider, it's absolutely the place for you! But more will have to wait for another post.

My mother has been saving and engineering ways to make money ever since I told her I was going to live in Spain, and very soon, we'll be going on a Grand Tour together. I'll have to take yet another break from the blog, though this one is excusable. See you near the end of June!