Today at Unusual Historicals, I get to rhapsodize about the unique art phenomenon of Mozarabic manuscript painting.

It's the art form my characters in Seven Noble Knights would have been most familiar with. 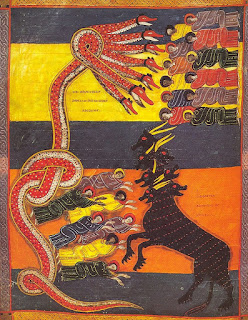 Yes, lots of bizarre, brightly colored pictures! Check it out!

Thanks for stopping by.

Posted by Jessica Knauss at 12:35 AM No comments: 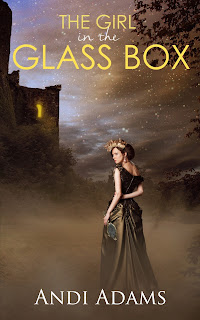 Andi Adams writes, teaches, gets excited about performing random acts of kindness, invents words, and talks with strangers, as often as she can. She loves learning about the world, about others, and about herself, and uses that knowledge to write realistic fiction – everything from YA Fantasy to Women’s Lit. She has a passion for travel, for all things Harry Potter (of course!), and for her two dogs, who are also incidentally her biggest fans. The Girl in the Glass Box is Andi’s first novel. For a daily dose of crazy or to see pictures of her cute fur-babies, follow her on Twitter and on Instagram. 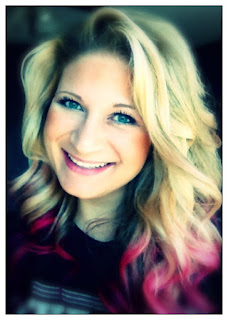 What are five things people may not know about you?
1.     I lived in Paris and went to the Sorbonne to study French Civilization and Phonetics.
2.     I have a Harry Potter tattoo on my ankle. (And I'm pretty sure I'd be sorted into Ravenclaw.)
3.     I sang in an all-girls a cappella group in college and still keep in touch with many of them. (SOP Shout Out!)
4.     I've competed in four Sprint Triathlons over the past five years and I hope to do another at the end of this month.
5.     I'm really crafty and love creative artsy stuff. Painting, party-planning, cooking – all of it. (My brother-in-law swears I should open a food truck that serves enchiladas and key lime pie, two of my specialties according to him.) I also paint canvas shoes for fun. I painted myself a pair of Harry Potter shoes and get stopped all the time about them. This penchant for creative pursuits lends itself well to my obsession with Pinterest (aka – the time vortex.)
Have you written any other books that are not published?
I have written a children's book series and am working on getting them published. And I've written a bunch of poetry, some of which has been published here and there.
What do you think about the ebook revolution?
Ebooks are awesome, especially for those who travel and need to have a bunch of books with them. I will always prefer reading a printed copy, but there are many instances when I've been grateful to have a number of books with me when I'm away from home. In addition, I feel like they've really liberated certain reading demographics. Many times people have felt embarrassed to read certain book genres or topics for one reason or another, but e-readers have eliminated that fear of judgment, which is really awesome.

What is your writing style?
I really love writing dialogue. Actually, I like it so much that I've given a lot of thought to writing screenplays. I mean, I love movies and I love dialogue. Sounds like something I should attempt, right? And I also really think it's important to incorporate female characters who are diverse, well-rounded, and dynamic. But never at the expense of men. Empowering women and treating them like, you know, humans, should not be done in an effort to bring down another group of people. Characters should be individuals. There are bad men and bad women, just as there are good men and good women. Generalizations and stereotypes don't belong in realistic fiction.

Do you write alone or in public?
It's really hard for me to stay focused when I'm home and family and friends are around. I hate having to excuse myself from what's going on to get work done (I have a little bit of FOMO, "fear of missing out," when it comes to that.) But usually, I like to take my work elsewhere, out of my apartment to limit my distractions. For instance, there's a conference room in my apartment building, so sometimes I'll go sit in there and work. Or I'll grab my computer and head to a coffee shop. For someone who works from home, it's almost like getting up and reporting in for work when I have to leave the comfort of home. That simple act of leaving makes my working time while I'm out more focused and uninterrupted. But of course, on rainy or lazy days, it's nice to work on my couch in my pjs.

What do you think is the hardest part about writing?
I used to think, "Writing the first draft is the worst! This is definitely the hardest part," until I finished my first draft and had to begin revisions. Then I thought, "Ugh, revision is so difficult. Where do I even start!? Okay, so revision is definitely the hardest part." Haha. So I guess any part you're currently working on can be considered the "hardest part." But in truth, I think the most difficult aspect of writing is just getting your butt in the chair. Trying to not find excuses or moving writing to the bottom of the priority list is what's most tricky. Even if you're only writing 15 minutes a day, you need to make writing important enough that you carve out that time to write or else it just won't get done. If you're writing as a hobby and only pick it up when it's convenient or easy, then that's fine for you. But if you are looking to pursue writing as a career and actually turn out completed, published works, there is no time for excuses. Just get your butt in the chair and write.

What have you put most of your effort into regarding craft and writing?
Attaining my MFA in Writing Popular Fiction was along road to hoe. As I mentioned, I completed my MFA over the span of two and a half years (the full duration of the program with no breaks), while I was working full-time as a teacher and I had a second job. The coursework, the deadlines, the stress – it was all pretty brutal. For as much as I loved the content and the material I was learning, everything was a great deal of effort and nothing was easy. In addition, most of our coursework was done online and, though I loved being able to complete my work from wherever I was living (London at one point, as a matter of fact), I certainly enjoy a classroom environment much more.
Outside of finishing the MFA, I would say that I put a great deal of effort into reading, both works of fiction and craft books. I am always reading. Seeing how authors I admire construct their stories is such a great way to understand craft in practice. I wrote a guest blog post about craft books and there are a ton out there that are really wonderful. Sure, no one can tell you how to write in a step-by-step guide, but there is always something new to try and practice in order for you to develop your own style.

Does your book have a moral/lesson?
Absolutely. A couple, actually. But I think the one that is most prominent and the one I want most people to take away from the book is that everyone has the power to create their own "happily ever after" and that happily ever after is a relative term. In any story, mine included, the villain strives to create her version of HEA through a particular course of action, which of course, many people would find reprehensible. But to her, it is what she wants/needs in order to be happy. Life is like that. Everyone believes themselves to be the hero of their own story and that their motivations for their actions are justifiable. It's all about perspective. There are two sides to every story and everyone is just trying to find their own happiness. If we take a minute to realize that, we may find ourselves to be a little more empathetic to others.

What is your favorite part of the book?
Hmm… that's a hard one. I really like the first chapter. After I finished writing the first draft, I ended up deleting pretty much the first third (about 100 pages) of my manuscript and writing them over. It was painful to just pitch all of that hard work, but I am so glad I did because what I wrote in its place is so much better than it was before. It is a first chapter that (hopefully) really grabs a reader's attention and sets the story up as a Dark Fantasy. I like the action, the pacing, the twists. It turned out to be one of the sections of which I'm most proud.
So that, and the part where Grog gives Genevieve his slippers. I just think it's so cute and such a turning point in their relationship. I have to be honest, I love all of my characters for different reasons, but Grog is my ultimate fav. He was so fun to write and I think some of his lines are laugh-out-loud funny. And his shift is incredibly meaningful.

What is your favorite book?
Anyone who knows me can tell you I am obsessed with Harry Potter for oh-so-many reasons. I am beyond impressed with Rowling's ability to world build, write dynamic and well-rounded characters, and hide information in the text to be used later. She herself is a wizard (well, umm... witch) to have created such magic. I could only hope to influence even half the number of readers she has.
I also used to teach high school English for almost 10 years. And I can honestly say that I am a huge Shakespeare nerd. I also love Jane Eyre, Wuthering Heights, and Frankenstein. As far as genre fiction, my favorite book is Jurassic Park Michael Crichton. I'm not even a big sci-fi fan, but that book is just AMAZING. In that same vein, The Martian by Andy Weir was equally awesome. The voice in which that book is told is funny and witty and clever and just plain great. Oh man, we've opened a can of worms talking about favorite books – I'm pretty sure I could go on forever about this.

The Girl in the Glass Box:
A witch. An apple. A mirror. That’s all most people think of when they recall the story of Snow White. But the truth is rarely so simple. What if the Queen wasn’t born evil and the princess wasn’t always so pure of heart? Is it possible that these two women could have ended up in one another’s place?

The Girl in the Glass Box tells the story of Agrippine and Genevieve, two women who are not all that different, but who quickly learn through a series of choices, encounters, and devastating losses that the course of their fates can change in an instant. Through the influences of the people they love and lose, both are redefined as their stories head for a different sort of happily-ever-after.