* * *
Young Gonzalo sat astride his mount on the valley crest with his brothers, his tutor, his uncle, and both companies of troops behind him. The valley of Almenar opened out green beneath them, fragrant as the morning sunlight warmed the dewy grasses. A hundred head of cattle grazed lazily, surrounded by droves of bleating sheep, their shepherd perhaps resting, hidden among the brush. Young Gonzalo heard the animals' calls beckoning him.

"It's everything our uncle promised." A jackrabbit bounded between his horse's legs.

Part One, Chapter VIIII of Seven Noble Knights is one of the most challenging passages I've ever written. Not only did I have to research plausible details for the the biggest and most pivotal battle in the book, but I had to put the reader in the valley, fighting alongside Gonzalo and his brothers. I needed the reader to feel the emotional equivalent of the sweat and blood the seven noble knights had to wade through. If this chapter wasn't convincing and memorable, the rest of the epic story would be hardly worth reading. 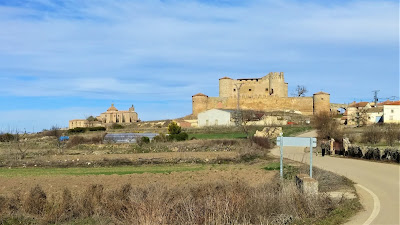 And I had to accomplish all this with no knowledge of the location. All I had to go on was Google Maps and the features the medieval source texts required of the terrain.

As the result of an extraordinary force of will, I now live in Spain! I'm also fortunate to have found a wonderful traveling companion in my friend, Daniel, who likes visiting out-of-the-way medieval treasures almost as much as I do. I said, "Soria is the only province in Castilla y León I haven't really seen," and he planned a trip there at the beginning of March that was nearly as epic as Seven Noble Knights. 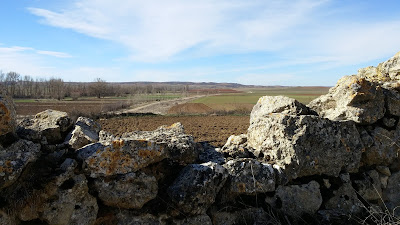 There are few things that make me feel more thankful than driving around in the Spanish countryside. As we left the province of Burgos, home to Salas de los Infantes, I imagined marching with my characters toward the fertile fields of Soria to take cattle and whatever loot they could find. I'm happy to report that Soria today matches the description in the excerpt above. It's resplendent with rolling farmlands and wild areas with much more possibility for cultivation than the rocky (though still beautiful to me) soil of Zamora. 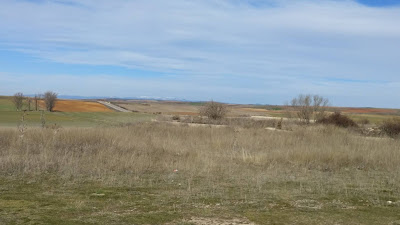 When we came up on Almenar, the site of the battle, the valley opened out below us even bigger than I'd imagined. Over one thousand years, the undulations of the land have surely changed, so I'm not too bothered that I couldn't grasp exactly where every important moment would've taken place.


* * *
The opposite crest was swimming in the red, blue, white, black, yellow, and green banners of Moorish soldiers as they appeared to rise out of the ground, sending the cattle lowing in every direction. The fluttering obscured the men beneath the flags and made it difficult to estimate their number, but if their hill was as wide as the one from which he now looked, there could be as many as three hundred.

The biggest surprise was the existence of the castle. It shouldn't have been a surprise, since "Almenar" refers to a battlement or watchtower, but there it was, with its own history. I regret that we couldn't find anyone to open the castle up to us, because from there, the views of the valley would have been the most impressive. 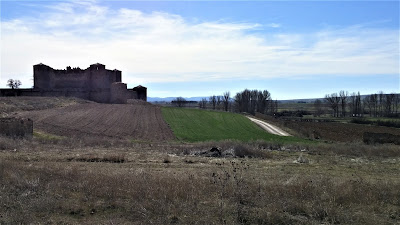 Some sources say the oldest parts of the castle are contemporary with my characters, the tenth century. This would be parts of the homage tower or keep, which we couldn't get close enough to inspect. If there was a castle in the tenth century, then the seven noble knights would've seen the Moorish troops coming at them from around it.

Most of the castle as seen today was built in the fifteenth and sixteenth centuries and belonged to the Counts of Gómara. Carlos II and Felipe V were in residence at certain times. This castle also inspired some of the legends written by the famous Romantic poet, Gustavo Adolfo Bécquer, and it's said he lived and wrote there. (It looks like a pretty good writers' retreat to me.) There was a sign on the door we could barely make out that said something about the modernist poet Antonio Machado and his young wife, Leonor Izquierdo, staying there, as well, and I later read that Leonor was born in Almenar. 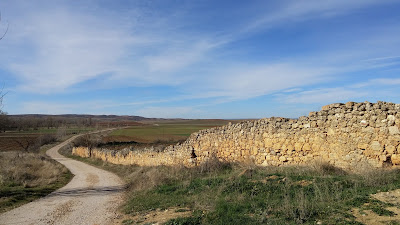 I'm glad the castle looms over the bucolic landscape today. The contrast between the peaceful fields and the manifestation of military power in stone reminds us of the battles, but also what so many were fighting for.


* * *
The moment the brothers appeared once again at the entrance of the tent, the drummers gave a terrifying crash and the Moorish knights fell on them, surefooted even on the undulating slope. Gonzalo gripped his sword as his only lifeline and thrust outward, cutting and swiping at whatever he could. The Moors in charge of moving the dead and wounded took away a hundred soldiers within two hours. Gonzalo fought on two fronts: the fear rising from his darkest heart had to be beaten back at every turn, and the neverending troops had to be cut down.

. . . and still the soldiers kept coming, with fresh horses and undamaged shields. Their prey could hardly move enough to control their own hands, and most of them had broken their shields in half and lost either their swords or their close-range daggers. 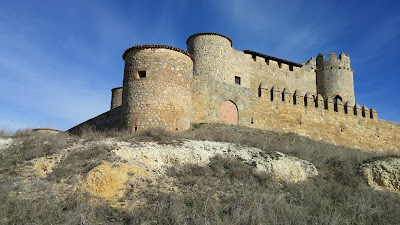 All excerpts from Part One, Chapter VIIII of Seven Noble Knights. Check this space or sign up for my newsletter to find out when this epic novel of family, betrayal, and revenge in medieval Spain becomes available again!

More adventures in Soria are available at my Facebook page (March 2019), but I've saved the best parts for future posts here!

Posted by Jessica Knauss at 5:14 AM No comments: Links to this post