As part of my deliberate, full-of-intention book launch for Seven Noble Knights, I arranged an interview with my local newspaper. It came out last week and looks impressive, taking up the entire content of page A3. (If you click the picture, you should be able to enlarge and read the article.)

I unexpectedly got two calls from local well-wishers when they saw the article. All right, I thought, today St. Helens, tomorrow the world! On Friday, I learned that Seven Noble Knights is the official selection of the Literary Divas Book Club for February 2017. I think the choice is a direct result of the article in the paper. I prepared for book clubs with a set of discussion questions in the back of the book, and I'm happy to visit or Skype with a book club with members who enjoy historical fiction—just contact me. I'll make an appearance at the Literary Divas meeting, which will demand an in-person performance of my authorial persona.

The authorial persona is the face an author presents to the world, an integral part of her "brand" in this new age of authorship. My persona is based heavily on the real me, but as it's developed, I've emphasized only the fun, exciting, or humorous parts of me. I figure no one wants to read books from a gloomy Gus. When circumstances have become too frustrating to bear in silence, I've blogged about them from a humorous angle to make them easier to swallow. See my posts about living in a hotel for nine months in 2013 or getting an apartment in Arizona with no furniture in 2011 for examples.

Last July, something happened to me that is not funny at all, ever, and that changed everything about my life down to the finest detail. I'm talking about the death of my beloved husband. I've written about it a couple of times here, but overall, I'm no Helen Macdonald (author of H is for Hawk) and no one wants to read about my grief, especially before I've had time to frame it with a tangible piece of wisdom.

It hasn't been easy to gauge how much of the truth to reveal during Seven Noble Knights' book release. Sometimes I mention my husband deliberately, and sometimes I gloss over his existence. Both options feel wrong. I hate to mention that death has already parted us, but we had an insanely happy marriage that deserves celebration. If I try to gloss over my grief, there's always the risk that people will ask a question whose answer cannot be fudged, and I will go too deeply into territory I don't want to visit publicly. During the book launch, these have usually been questions about my writing process and my future writing plans. My husband's love was woven throughout my life, even my writing process, and now that he's gone, I'm faced with existential questions about whether to move forward that must be answered before I can answer how.

I completed both of my novels before my husband became ill, and I dedicated both of them to him. When the page proofs of Seven Noble Knights came back with my paragraph about him in the present tense, it was intensely painful to have to remind the publisher that my husband can only be referred to in the past tense now. It doubly hurt that I had never shown the dedication to him, so he never got to see it. I had been saving it as a surprise.

My mother found a typo in the published edition, and I don't know whether it's been corrected. In the second-to-last chapter, I refer to a character as a "young window." It should be "widow." I think the typo was a Freudian slip, because I didn't want to be a widow when I first wrote the passage any more than I do now, to the extent that I didn't even want to type the word.

But these are not the anecdotes that sell a medieval epic, are they?

In the newspaper interview, I approached this issue subtly. Notice that I don't go into why I've returned home to my mother, and I only mention that because of the local connection. In any other context, it would be a nonissue. I refer to my husband simply as "late." Such a small word doesn't describe the wonders of our marriage or the yawning black abyss that is my grief—because no one wants to know about that. It provides only the bare fact. In order to maintain the positivity of my authorial persona, that small word may be as far as I can go.

The part about the idea for the sequel is true. Recently, I've recuperated hope for life, and I hope that I will actually do some writing on that project soon.

I've discussed where to draw the line with a couple of psychology professionals, and their conclusion was to "Do what makes you comfortable." Not easy, since I haven't felt comfortable about anything for more than six months! If you have brilliant ideas about how much of my own sad story to tell as part of my authorial persona, I'd love to hear them.

Unique Events in 2017 for the Seven Noble Knights Paperback Release

Historical author Maria Grace's feature, Writing Superheroes. Learn my mild-mannered secret identity and how it's actually full of superpowers, too.

The Facebook Launch Party, January 14, 7–9 pm EST (4–6 pm for us Westerners). Find out all the medieval gossip, ask the author any question you want, and win prizes including a softcover edition of Seven Noble Knights and gift certificates to La Tienda, the premiere source for delicious and beautiful imports from Spain. Find out everything about the Facebook Launch Party here.

Paperback release day! Seven Noble Knights, the softcover edition, will be available at the following links, and you can preorder a copy any time.

An appearance in the St. Helens local newspaper gives my opinion on ebooks and the lure of historical fiction. 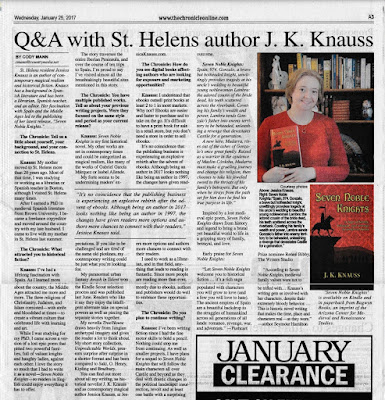 A great conversation with my pals, the Book Doctors, at the Huffington Post. They mention a blog post about the Pitchapalooza where we met in person, and that's here.

A glowing review appears in February's issue of Historical Novel Review, issue 79. It makes me glow when I read it, anyway!

Seven Noble Knights is the official February pick of the St. Helens Literary Divas Book Club. The author made a special appearance and good times were had! Contact the author to arrange a Skype or in-person visit for your book club.

An interview with All Classical Portland's book guru Ed Goldberg, crammed with noble knights, devious ladies, and ominous auguries! Check it out and download it at the station's site or at iTunes, free.

As 2017 matures, you'll get rare opportunities to meet me, the author, in person, and get your paperback copy signed:

If you just can't get enough Seven Noble Knights, many wonders await you at the Grand Book Launch Blog Tour and these entertaining and informative posts.

"Shrouds and Stones" is a free prequel story, a companion to Seven Noble Knights that describes the "origin story" of the villainess, Doña Lambra. Enjoy it in your choice of three formats for free.