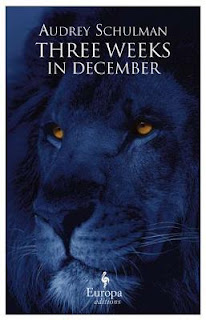 I'm not exaggerating or falling back on platitudes when I say that this book is unforgettable. I got to read Three Weeks in December in an advanced proof with no cover design, so I couldn't be influenced by the blue lion on the cover of the for-sale version. The lion is mysterious, but fails to capture the essence of the book for me, probably because it is such an amazing book, simple and complex at the same time.

As all the other reviews will mention, it tells the story of two social misfits separated by 100 years. One traces the historical incident treated as an adventure in the movie The Ghost and the Darkness, but with richer characters and much more emotional resonance. The other tells of a botanical quest by a woman who can relate to plants -- and, it turns out, to gorillas -- more easily than to humans. The stories told in alternating chapters have thematic similarities throughout, but are truly tied together at the end. For me, the end was a surprise in every way, and it's only after getting over the initial shock that I realize it's not contrived, but true to the artistic vision and truly thought-provoking.

The entire book is consistently rich in detail and gorgeously written. Every reader should be able to sympathize deeply with the social outcast characters because their take on the world is so vividly portrayed and makes so much sense within their context. This novel is a triumph of limited third person point-of-view narration.

Three Weeks in December is incredibly well-researched, the kind of book that will make you feel smarter and more engaged with the world. I plan to check out Schulman's previous novels to see what other gems I've missed so far.
Posted by Jessica Knauss at 12:35 AM